Web Summit kicks off its second year in Lisbon

Some 60,000 expected at event with Al Gore and Intel chief among keynote speakers 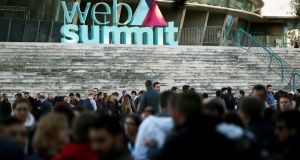 This year’s Web Summit in Lisbon, at which “executive” attendee tickets are priced at €4,995, officially sold out on Friday.

It’s that time of the year when the winners and the wannabes gather together for the Web Summit. But after the novelty value of a sparkly new venue and host city for the tech-focused event in 2016, what’s in store this time out?

There’s an air of expectation in Lisbon as the Portuguese capital gets ready to welcome some 60,000 techies this week. This year’s Web Summit officially sold out on Friday with those snapping up the last tickets paying up to €1,500 a pop. “Executive” attendee tickets priced at €4,995 had also all been sold.

One notable difference for the Lisbon version of Web Summit is that while there are still plenty of high-profile speakers, the event has lost some its previous celebrity razzmatazz. During its last few years in Dublin, the Web Summit became as well known for the supermodels, rock stars, Hollywood actors and former sporting legends tagging along as it did for tech entrepreneurs. There are still some of them making their way to Portugal, including Triple H, Wladimir Klitschko, Wyclef Jean and Sara Sampaio, but arguably some of these are not of the same calibre as in previous years.

For many attendees, the absence of Bono et al isn’t necessarily a bad thing. Whether the craic is now also something that has gone following the event’s move to Lisbon is, of course, also up for debate.

What started as a small event with just 400 attendees back in a single room in Dublin in 2009 has since ballooned into a giant affair that is now billed as one of the “must-attend” tech conferences. It has also become something of a cash cow for its founders, having led to a plethora of sister events including Rise, Collision and MoneyConf, the latter of which will be held in Ireland next year.

In 2016, the Lisbon event attracted 53,056 attendees, up from 40,000 during its last year in Dublin. However, despite the higher-capacity venue, there were issues with overcrowding. Indeed, many ticket-holders were forced to watch the opening ceremony on a screen outside the FIL and Altice Arena (formerly known as MEO arena) last year so there will be concern about how the organisers plan to deal with close to 7,000 additional people this time out.

“To avoid overcrowding at opening night this year, we have instigated a separate invitation and ticketing system for attendees. The event is now at capacity and we encourage all those who have not received to avoid the venue and watch the live stream,” a spokeswoman for the Web Summit told The Irish Times.

The summit officially gets under way on Monday with a series of small talks but it begins in earnest on Tuesday morning with opening remarks from Portugal’s prime minister, António Costa. Al Gore will close the event on Thursday.

Before the first speaker had hit the stage, there was a spark of controversy with alleged cases of discounted student tickets being touted for more than 130 times their original price. The organisers said they were investigating.