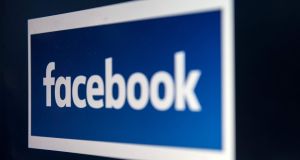 Facebook has suspended analytics firm Crimson Hexagon while it investigates how the company collects and shares data from the site and its Instagram platform. File photograph: Oli Scarff/AFP/Getty Images

Facebook has suspended analytics firm Crimson Hexagon while it investigates how the company collects and shares data from the site and its Instagram platform.

The company took the decision amid suspicions that the third-party firm had potentially violated its policy barring surveillance.

The social media giant has been facing increased scrutiny over how third-party firms use its data since news broke in March that data firm Cambridge Analytica (CA) improperly accessed Facebook user data.

The newspaper said among the firm’s clients is a Russian nonprofit with ties to the Kremlin.

“We take these allegations seriously, and we have suspended these apps while we investigate.”

Facebook said on Friday that Crimson Hexagon is co-operating and that so far its investigation has not found evidence that the firm obtained Facebook or Instagram information inappropriately.

Crimson Hexagon says on its website it has access to more than one trillion consumer conversations from social media, forums, blogs and reviews.

In a blog posting, Crimson Hexagon chief technology officer Chris Bingham said the company “abides completely” by the rules social media sites, including Twitter and Facebook, put in place to limit the ways third-party companies can use their data.

He said the firm only collects publicly available social media data. He contrasted that with CA’s use of private user data.

“Government entities that leverage the Crimson Hexagon platform do so for the same reasons as many of our other non-government customers: a broad-based and aggregate understanding of the public’s perception, preferences and sentiment about matters of concern to them,” he wrote. – AP