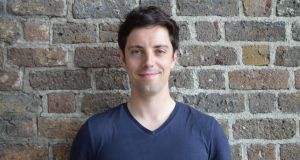 Conall Laverty, Wia chief executive: “Blackbox gives Wia the opportunity to dive into the Silicon Valley ecosystem and be mentored by some of the best the industry has to offer”

Wia, a Dublin-headquartered company that has developed a cloud platform which enables developers to turn sensor-based hardware into internet-of-things devices, has become the latest Irish start-up to be chosen to take part in BlackBox Connect, an event for business founders backed by Google. Previous Irish participants in the programme include VideoDoc, FoodCloud, Webio, GirlCrew and Bonza Quote.

Founded by Fadi Bishara in 2010, Blackbox Connect aims to link foreign companies with high growth potential to the Silicon Valley network. The two-week residential accelerator, which takes place later this month, consists of an intense programme of pitching workshops, mentoring sessions and talks with investors, lawyers, journalists, experts and entrepreneurs.

Among the speakers to have advised attendees at Blackbox are the YouTube cofounder Chad Hurley and the former Google Ventures president and chief executive Bill Maris.

More than 400 start-ups from over 60 countries have participated in Blackbox Connect, with 65 per cent of them having secured funding within six to nine months of participating in the programme.

Wia, a former participant in the NDRC’s LaunchPad programme, has partnerships in place with a number of leading technology companies, including Sigfox, PubNub and Twilio. It is also collaborating with Vodafone Ireland for its narrowband internet-of-things network roll-out. It has raised €1 million to date, including €750,000 in a funding round led by Suir Valley Ventures last year.

“Blackbox gives Wia the opportunity to dive into the Silicon Valley ecosystem and be mentored by some of the best the industry has to offer. I’m looking forward to getting to know the founders with some of the best start-ups in the world,” said founder Conall Laverty.

Separately, Calt Dynamics, a Wicklow-based start-up that is developing high-precision photolithography-based 3D printers, has been accepted into a prestigious TechStars accelerator programme in Connecticut.

The company has won a place on the new Stanley Black and Decker Additive Manufacturing accelerator, an intensive 90-day programme aimed at helping companies rapidly grow their business. Each of the 10 participants receives $120,000 in funding and office and workshop space at an additive manufacturing facility in Hartford.

“The funding and support will help us launch our range of printers on a global scale and make a lasting impact on the 3D printing field. It will help highlight Calt Dynamics, our team and Irish innovation internationally. We will drive head first into the accelerator, and have plans for a funding round later this year,” Keogh told The Irish Times.

Keogh is also one of the founders of the Rapid Foundation, a charitable organisation that provides people in developing countries with access to and training in disruptive technologies.

He was last year named in the Forbes 30 Under 30 list of Europe’s brightest young people along with other notable Irish names such as the Stripe cofounders Patrick and John Collison, the FoodCloud cofounder Iseult Ward and the mixed martial arts fighter Conor McGregor.

1 Four things that could help Ireland escape from the Covid-19 recession
2 College of Surgeons faces legal challenge to Na Fianna GAA contract
3 Brown Thomas and Arnotts shoppers will be able to book time slots for entry
4 Tax and the Pandemic Unemployment Payment: Your questions answered
5 Job losses in tourism and retail in Dublin could be permanent, new report warns
Real news has value SUBSCRIBE