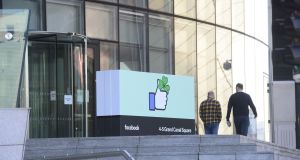 The European commission proposed a 3 per cent tax on revenues in March from Apple, Facebook, Google and other companies. Photograph: Cyril Byrne/The Irish Times

Austria is stepping up plans for an EU-wide digital tax on big tech companies such as Apple and Google, despite opposition from within the bloc.

Hartwig Löger, Austria’s finance minister, told the Financial Times that a priority during his country’s presidency during the second half of this year would be getting governments to thrash out the details of European Commission proposals for a temporary tax on digital companies’ revenues.

The plans have been championed by some countries, such as France and Spain, which argue that they are a quick way to make tech companies pay more tax.

But the proposals have been opposed by other EU nations, including Ireland, Luxembourg and Sweden, which argue that the plans deviate from internationally agreed principles and would complicate efforts to reach a global deal on calculating the sector’s taxable profits.

Berlin has also expressed reservations about the details of the commission’s proposals, despite being an early backer of EU action. Angela Merkel, Germany’s chancellor, and French president Emmanuel Macron made a joint call last month for “an EU agreement on a fair digital taxation by the end of 2018”.

Mr Löger, who worked in insurance for 30 years before joining the Austrian government last year, said the inability of national tax systems to capture fully the profits made by some of the world’s largest companies created an imperative to act.

“When we see some actors who nearly pay nothing on a European or national basis, even when they are getting large turnover out of each country, it’s not OK,” he said. “I don’t think it’s the right approach to say that we wait until there is a solution on a global basis.”

Mr Löger admitted that “it’s not so easy to find the right definition”. But while there is no guarantee that an agreement can be reached by the end of the year, “what we expect is clearness and the basis for solutions”.

The commission proposed a 3 per cent tax on revenues in March from Apple, Facebook, Google and other companies with total annual worldwide revenues of €750 million and EU revenues of €50 million. It said the tax could target revenues from specific activities such as online advertising and selling users’ data.

Brussels estimated the proposal would affect about 150 of the biggest tech companies and could raise as much as €5 billion per year – a figure critics view as optimistic.

The EU’s levy, which needs unanimous support from member states to take effect, is intended as a temporary measure while international negotiations continue within the Organisation for Economic Co-operation and Development.

Brussels estimates that factors such as mismatches between national tax systems and their difficulty in capturing the scale of companies with large online activity but with a small physical presence mean that digital businesses face an effective tax rate of only 9.5 per cent, compared with 23.2 per cent for traditional business models.

Austria’s ambitions are an attempt to revitalise a negotiation that seemed close to falling apart after a bruising discussion among finance ministers in April. At the meeting, Bruno Le Maire, the French economy minister, complained that his counterparts were being cowed, out of fear of provoking US president Donald Trump.

Mr Le Maire told the FT on Friday that the time had come for the EU to decide whether it had the political will to fully tax the big tech companies.

“All of those in Europe who refuse to get results on the taxation of Google, of Apple, of Microsoft or of Amazon, will have to explain to their citizens why they reject fiscal justice,” he said. – Copyright The Financial Times Limited 2018

1 Will brother’s widow get half of our parents’ estate when they die?
2 Banks face ‘hectic’ loan restructuring as payment breaks end, Goodbody warns
3 Should I switch bank now with Ulster Bank at risk of closing?
4 Save yourself money and heartache by reviewing your house insurance
5 Finance Ireland refinances mortgages with low level of payment breaks
Real news has value SUBSCRIBE