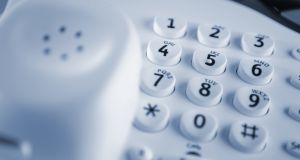 Those who opted to sign up were supposed to be billed by Eir for line rental only and by Yourtel for calls. However, in most cases Yourtel did not even contact Eir to have the customers switched before proceeding to bill them

Following an investigation by industry watchdog ComReg, the German telco, which has a previous conviction for breaching regulations here, pleaded guilty at Dublin District Court to 88 charges under section 45 of the Communications Act, which relates to charging for services not provided.

The court heard how the company, which entered the Irish market in 2013, made unsolicited “cold calls” to thousands of older people living in rural areas, offering them discounted landline services if they switched to Yourtel.

Those who opted to sign up were supposed to be billed by Eir for line rental only and by Yourtel for calls.

When customers refused to pay for what effectively counted as “double billing” they were threatened with legal action and notified that their unpaid bills had been placed with debt collection agencies, with implications for their credit ratings.

The court heard how the company’s heavy-handed manner had caused great distress to customers.

Imposing a €750 fine for each of the 88 charges, Judge Flann Brennan said the company’s actions amounted to “deceit and fraud”.

Yourtel, a subsidiary of Berlin-based Primaholding, which has operations in Germany, Austria and Switzerland, had been selling products here based on carrier pre-selection (CPS), which allows customers to select different providers for their line rental and for their calls in order to reduce costs.

Miriam Kilraine, regulatory operations manager with Comreg, told the court some 2,400 Yourtel customers in Ireland out of a customer base of 5,000 had made complaints to Comreg, which she described “ as totally unprecedented”.

Ms Kilraine said Yourtel had conducted its business in Ireland through a “virtual number” which gave customers the impression they were talking to people in a Dublin office.

Apart from double billing, she said many customers complained they had not been afforded a cooling-off period during which they could cancel their contract, while others said they believed Yourtel was part of Eir.

The average debt collection agency letter sent to customers on behalf of Yourtel – seen by Comreg – was for sums of between €400 and €500, she said, which typically consisted of bills for the remainder of the contract, late payment fees and legal costs.

At the height of its business here, Yourtel had approximately 5,000 Irish customers but this has subsequently fallen to 1,300 and the company is apparently no longer trying to add to its Irish customer base.