Consolidation on the cards as retail pharmacy feels squeeze 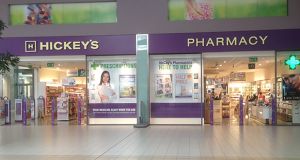 The multimillion euro sale of Hickey’s to Uniphar was announced on Wednesday.

With more than 1,800 pharmacies employing more than 12,000 people locally, the Irish pharmacy sector footprint is significant, with some serious competition and at least at one stage, serious profits to be made.

This might account for the fact there has been considerable consolidation in the space in recent years.

Uniphar’s multimillion euro acquisition of Hickey’s, revealed on Wednesday, is but the latest in a series of big deals to be announced in the sector in recent times.

Big players such as Lloyds and Boots continue to dominate the landscape. At the last count the former had 94 pharmacies nationwide and nearly 1,000 employees while the latter had 87 stores in the Republic and more than 2,000 staff.

Other chains have also been busy expanding though, not least Hickey’s, which was seeking to hit 60 stores by 2022. Under the new ownership, it may hit that target earlier than expected. Uniphar has itself built up a considerable presence in the retail space with 299 stores due to its ownership of the Allcare and Life pharmacy chains.

There has been a considerable hoovering up of smaller independent players along the way with Lloyds acquiring stores from the McSweeney Group while Cara Pharmacy, the group owned by former Dragon’s Den star Ramona Nicholas and her husband Canice, bought Abbey Healthcare.

Other chains have resorted to taking in outside investment to stay ahead, such as the McCauley pharmacy group, (formerly Sam McCauley Chemists) which is now majority-owned by Carlyle Cardinal Ireland, following a €50 million takeover in 2017.

But while pharmacies were once seen as huge money spinners, profits have plunged in recent years, with many now looking at health and beauty to bring in the pennies, rather than dispensing fees. Take McCauley’s for example. The chain, which has 35 pharmacies and employs about 680 people, now only obtains about 40 per cent of revenues from drug-dispensing.

The move into health and beauty may have helped to safeguard the sector but with the Covid-19 crisis leading to lower footfall in towns and cities, pharmacy chains increasingly face the double whammy of high rents and a shift from consumers to lower cost online stores. Further consolidation in the sector is likely in the coming years as a result.