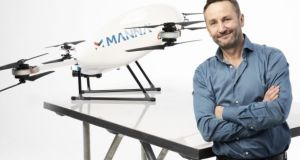 Irish drone delivery start-up Manna, which has been frustrated in its efforts to pilot a takeaway food delivery service by the coronavirus crisis, is looking to learn from the pandemic.

Manna founder and chief executive Bobby Healy said the shutdown of parts of the economy showed the importance of delivery options for essential food and medicines, particularly for the elderly and infirm in rural areas.

He said the company was progressing with plans for such a service but added it might realistically only be able to offer services at scale for a future outbreak.

“Disruption is what suits start-ups, it is what they thrive on. They can pivot quickly and that is definitely the case for us. The current situation is teaching us as a company not just to focus on hamburgers and fries but also on other things that we know will allow people to stay home and stay safe,” he said.

The start-up had intended to pilot a takeaway food delivery service on the campus of University College Dublin this month with drones delivering food directly to students and lecturers and had signed up takeaway service Just Eat and restaurant Camile Thai as its first commercial partners.

But it had to postpone the launch due to the Covid-19 outbreak and the subsequent closure of UCD along with all schools and colleges around the State.

Mr Healy said the company was still intent on launching its UCD delivery service as soon as is possible but had in the meantime turned its thoughts to how else its drones might be used.

“There are lots of people who are not supposed to leave their homes right now but some have to for things like picking up prescriptions or getting food,” he said. “Obviously human-based delivery is an obvious way to deal with this but there are still contact risks associated with it.

“If we do a delivery with our drone it goes under a UV light first which destroys any viruses and then the drone deliveries directly into someone’s garden, allowing the recipients to pick it up themselves,” he said.

Mr Healy said the Irish Aviation Authority (IAA) had yet to give the go-ahead for Manna to launch its services widely but that it was in continuing talks with it and with regulators in other jurisdictions.

While disappointed at having to postpone the launch of its food delivery service, Mr Healy said Manna was using the time well by ramping up flight testing.

The company is currently averaging about 2,000 test flights of its drones a week.

1 Should my mam wait for house prices to drop before buying?
2 Almost 70% of home buyers to purchase within next year
3 Covid-19 mortgage breaks: What’s the catch?
4 Covid-19 takeover of private hospitals to cost insurers €180m
5 Brother is dragging his heels as executor of uncle’s will - is there anything I can do?
Real news has value SUBSCRIBE