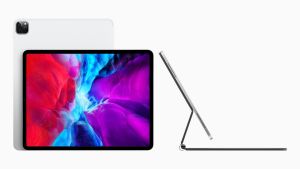 There are two sizes of iPad Pro to choose from: the 11-inch, more compact iPad Pro, and the 12.9-inch device.

You know what to expect from Apple’s iPad Pro. A high-powered tablet that is taking aim at your laptop, the iPad Pro has set out its stall from the day it launched.

The updated version is much of the same. Big screen, thin bezels, lots of power. But how many people have ditched their computer for the iPad? No doubt there are many who now find their laptop gets significantly less use these days, but there are occasions when you need to drag out the old machine for an hour or two.

That all may change with the latest update for the iPadOS software, which brings support for the Magic Trackpad. While iPadOS 13 brought some support for bluetooth peripherals, the latest 13.4 update makes it far easier to connect your mouse or trackpad to your tablet.

Suddenly, the iPad is more like a laptop replacement than ever before, even in the Magic Trackpad is an added extra.

Of course, that is not just limited to the newest iPad Pro. The trackpad support and the bluetooth mouse function will work with all iPad Pros, any regular iPad over generation five, the iPad Mini 4 and later, and the Air 2.

So why buy the iPad Pro 2? Because it’s the best one out there, to put it simply. The latest device has an updated chip, the A12Z Bionic chip which has an eight-core CPU and an eight-core GPU, with a neural engine. There’s 6GB of RAM included too; what that all means is that you can ask the iPad to do a lot without slowing things down.

There are two sizes to choose from: the 11-inch, more compact iPad Pro, and the 12.9-inch device, which has been finding favour among the more artistic types. If you are an artist, the bigger canvas offered by the 12.9-inch version, plus the control brought by Apple Pencil, is hard to resist.

There have been some changes to the rear camera. Instead of the single lens, you now get an additional 10-megapixel ultrawide lens so you can take more sweeping shots. It can record 4K video too. The iPad is a little more unwieldy than the iPhone though, so it’s not something that I used it for too often.

The new iPad has a Lidar sensor to measure distance built into the rear camera array, which at the moment is great for using the Measure app but in the future will help with augmented-reality apps.

That is all encased in the same type of camera bump that we saw on the iPhone 11 Pro. The one difference is the iPad Pro is not made of a single piece of glass, but it isn’t something we will be quibbling about here.

On the front-facing camera, things work as you would expect. You can take portrait photos, and FaceID still works well regardless of the orientation of the screen – as long as it can see your face it will unlock the device for you. Having used the iPad for a lot of Zoom calls in the past week though, I’m still trying to find that optimal angle when the iPad is in landscape mode. It’s not a flattering one right now, because of the positioning of the camera.

The latest generation of the iPad Pro is powerful, and the new technology added to the iPad makes it even more so. The Lidar sensor may not get a huge amount of use now, but it is setting the stage for future advances in augmented reality.

If you are looking for something that looks or feels drastically different to the last generation of iPad Pro, you won’t get that here. This is tried and tested – and that’s not a bad thing. There is also the price tag to consider. The iPad Pro isn’t cheap, as you might expect.

Apple has doubled the base storage for the iPad Pro – it now starts at 128GB instead of 64GB. As well as the trackpad support, the iPad pro will be compatible with the Magic Keyboard that is landing in May. That will also work with the previous generation of iPad Pro, so it’s not a sole reason to buy one, but it is a nice extra.

If you are in the market for a pro tablet, the new iPad Pro ticks all the boxes.