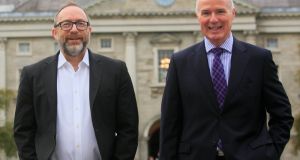 It may just be a case of getting lost in translation but IE Domain Registry (IEDR), the group responsible for the managing and maintaining .ie domains online, increasingly seems to be taking a laissez faire attitude to regulation on the internet.

The group marked the third annual Internet Day by calling for a new Internet Policy Forum. Its purpose? To address international internet policy regulations that the registry’s chief executive David Curtin said place Ireland “between the hammer and the anvil”.

On the one hand, he says, we have an obligation to enforce EU regulations; on the other, there is an imperative to provide a stable environment for US multinationals based here.

US companies are in Ireland, not because they like the freckles on our cheeks but because we provide access to the second largest trading bloc in the world with a competitive tax regime. In addition we speak English and, unlike our noisy neighbour, we’re not likely to stomp out in a huff.

These companies need to be in Europe and, whether it is here or in another member state, they will face the same EU regulatory strictures.

The inference from Curtin’s comments is that we should strive to loosen EU rules so as not to discommode US companies based here.

This follows a recent proposal to loosen the rules by dropping a requirement for .ie domain registrants to prove a valid “claim to the name”.

Such a move would make it easier and faster for individuals and businesses to register a .ie domain name. IEDR argued it would open up the .ie domain names space to citizens, clubs, communities and businesses. It would, of course, also open it up to cybersquatters – a feature largely absent from the .ie market until now.

And, as it put the proposal out to consultation, the IEDR very deliberately let it be known that it had already approved the change internally and with stakeholders “in principle”.

The message in both cases is the same – minimise regulation. The IEDR should be careful. Whether it likes it or not, it runs the risk of presenting Ireland as a soft touch on internet privacy and protection. And it’s hard to see how that benefits any legitimate interest.