As Republicans plan reform, Irish eyes will be on corporate tax 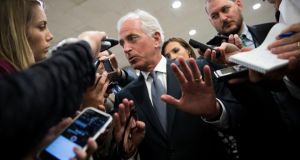 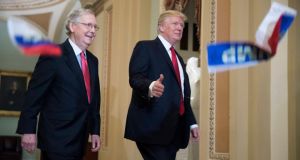 With the clock ticking on the countdown to Christmas, pressure is on US Republicans to agree a tax-reform plan as they try to pass at least one piece of significant legislation this year. They have one problem, though: their own president.

On Tuesday a rare lunch between the president and Republican senators on Capitol Hill, which was supposed to focus on tax reform, was overshadowed by an escalating feud between Donald Trump and Senator Bob Corker. In a series of tweets Trump said that Corker “couldn’t get elected dog catcher in Tennessee.” Corker said Trump should stay away from tax reform and dismissed Mr Trump’s appearance at the lunch as a photo opportunity. Worse was to come as Senator Jeff Flake delivered a devastating speech castigating Mr Trump from the senate floor, barely an hour after attending the lunch.

In particular, Republicans in Congress are becoming increasingly frustrated with Mr Trump’s interventions on tax. On Monday he tweeted that he would oppose any attempt to reduce the amount Americans could save in their popular 401(k) retirement accounts. In fact that proposal was still under discussion, as confirmed by Kevin Brady, chair of the powerful ways-and-means committee of the US House of Representatives, on Wednesday.

There will be NO change to your 401(k). This has always been a great and popular middle class tax break that works, and it stays!

Nonetheless, despite tensions within the Republican Party about how to pay for what the president is calling the “biggest tax cuts ever”, tax-reform plans are advancing.

The 435-member House of Representatives, which is due to vote on Thursday on a budget resolution paving the way for tax reform, may unveil its tax plan as early as next week. The 100-member US Senate is likely to take more time.

Although squabbling continues about the state and local tax deductions available for individuals, for Ireland the focus will be any changes to corporate tax and incentives for multinationals to repatriate profits. Earlier this week Trump suggested that $4 trillion, rather than the $2.5 trillion usually cited, is sitting overseas. “Under our plan that money will flow back in. It will be very quick, and it will be very easy,” he said. Ireland will be watching closely.