Will Government pony up for better pensions for women?

Cantillon: Cost of sorting out entitlements for 36,000 women could be a deal-breaker 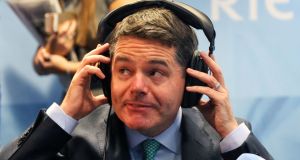 Minister for Finance Paschal Donohoe: his comment that the marriage bar that forced women out of the Irish workplace was “bonkers” gave the issue of women and pensions much-needed oxygen. Photograph: Colin Keegan/Collins

The 36,000 or so people, mostly women, who have been living with the reality or prospect of a reduced state pension could be forgiven this week for shaking their heads in wonder.

After years of shouting at the distinctly deaf ears of the political classes, all of a sudden they were centre stage.

It may not, technically, have been a matter for Budget 2018, but the assertion by Minister for Finance Paschal Donohoe in response to a question on a RTÉ post-budget phone-in that the marriage bar that forced women out of the Irish workplace was “bonkers” gave the issue of women and pensions much-needed oxygen.

The bigger issue, of course, is those women who have been working since the marriage bar but who have lost out on some or all of a potential state pension because they took time out of the workforce to raise a family or care for relatives – especially before 1994 – or those who opted for part-time work.

But the reality, despite all the lionising of their cause this week by politicians of all hues, is that little is likely to change.

The bottom line, as Minister for Social Protection Regina Doherty noted, is that backdating the homemakers allowance to cover the years before 1994 could cost close to €300 million. Putting right the wrongs of the marriage bar for those still living without the pensions they would have earned could cost another €200 million.

Even U-turning on the changes made in 2012 that made it harder to get a state pension in the first place, and also penalised those with reduced numbers of contributions, would mean a €75 million charge on the exchequer next year and more again in future years.

There are always easier short-term choices for parties looking to secure votes at the next general election. That’s the biggest barrier these disenfranchised workers – mostly women – face in securing better pension provision.