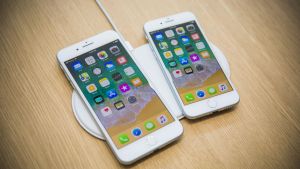 The iPhone 8 Plus retains its predecessor’s design for the most part, but it also keeps its dust- and water-resistance rating.

If you were in the market for a new smartphone, it would be tempting to overlook the Apple iPhone 8 Plus, which is priced from €939. After all, the phone had barely been announced when Apple overshadowed its own release with the news of the iPhone X, due out next month. That phone will be the major redesign that we had expected, while the iPhone 8 Plus looks remarkably similar to its predecessor.

But while it may not be the flashiest of Apple’s releases this year, the iPhone 8 Plus has a lot going for it, particularly if you held off on last year’s upgrade with the expectation that the 10th anniversary of Apple’s smartphone would bring more exciting things. A new chip means faster performance.

Aesthetically, there is little to tell the iPhone 8 Plus apart from its predecessor. The design is largely the same, and mode of the improvements are on the inside. Side by side, the main difference is the rear of the phone, which has changed from aluminium to glass. It looks a little prettier, but it also serves another function: facilitating wireless charging. Yes, Apple has finally embraced wireless charging, which means we should now see a slew of new accessories aimed at the Qi standard, allowing you to drop your phone on a charging pad rather than having to plug it in.

You might be concerned about the wisdom of putting more glass on the iPhone in terms of practicality. A few days ago, my iPhone 7 Plus survived an incident that involved a small drop and an inadvertent kick across the room into an aluminium door frame – don’t ask, let’s leave it as “child-related incident” – but I’m not so sure that the 8 Plus, with its Gorilla Glass back, would fare as well.

If you’ve been using the iPhone 7 Plus, you’ll know all about the dual 12-megapixel cameras. There have been some improvements made here, with a new image sensor that Apple says it rebuilt, but the major differences are chiefly in the phone’s portrait mode and video.

Portrait mode now has portrait lighting effects – natural light, studio light, contour light, stage light – that produce different effects. I mainly stuck with natural light; the feature is in beta still, so bear that in mind. Side by side with the 7 Plus, the portrait photos are noticeably better: sharper where it counts and less grain where you don’t need it.

On the video side of things you can now record in 4K at 24, 30 or 60 frames per second, which gives excellent results.

Little has changed in terms of the display size or pixel count for the 8 Plus, but the True Tone technology that debuted in the iPad Pro can now make your iPhone screen look a bit more natural, react to different lighting situations and adjusting the white balance accordingly. It’s a small tweak in the grand scheme of things, but it’s a definite improvement.

In pricing terms the iPhone 8 Plus starts at €939 for the 64GB in the Apple Store, although undoubtedly there will be lower-priced options available through contracts from various mobile-phone operators.

If you were expecting a major leap in battery life, you’ll be disappointed. The iPhone 8 Plus doesn’t add much to the battery capacity since last year’s model; in fact, it sticks closely to the iPhone 7 Plus in everything from talk time to watching video. What that means in real life: you’ll get a phone that will last the day for the average user, which is what most people require as the bare minimum.

The good news? Apple has also embraced fast charging. The bad news? You’ll have to pay out extra for the USB C charger that enables it.

The improvements in the camera are worth skipping the iPhone 7 Plus in favour of the latest model, while the A11 chip makes everything run a little more quickly and more smoothly.

Wireless charging is a convenience rather than a necessity, but it’s nice to see Apple finally embrace the Qi standard.

The iPhone 8 Plus was always going to be overshadowed by the forthcoming iPhone X, although that requires some deep pockets.

Battery life, while good, sticks closely to the iPhone 7 Plus, so don’t expect any major boost here.

The iPhone 8 Plus retains its predecessor’s design for the most part, but it also keeps its dust- and water-resistance rating. The new model also supports fast charging, but you have to buy a USB C adapter and cable to make it happen.

Don’t dismiss the iPhone 8 Plus simply because it’s not quite as flashy as the iPhone X – a great camera, decent display and good battery life make it worth considering – especially if paying more than €1,100 for a phone doesn’t sit easy with you.