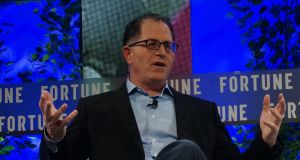 A “new age of miracles” is just around the corner, with progress coming at a faster rate than in the previous 35 years and bringing the possibility of eradicating deafness, blindness and paralysis, Dell founder Michael Dell predicted on Wednesday.

Mr Dell pointed to neural implants, robotics and AI and said the next generation of mobile technology would help to drive a new revolution, combining with the explosion in data to help improve people’s lives.

The founder of the technology company, which is celebrating 35 years in business, was speaking at the company’s annual conference in Las Vegas.

Describing previous advancements as “just the pre-game show to what’s ahead”, Mr Dell said 5G would play a crucial role in the next wave of progress, allowing data to move faster.

But he warned that there would also be challenges ahead for technology companies, and they needed to ensure that technology reflected “our humanity and values”.

“While technology can amplify human genius, it can also amplify human frailty,” he said. “Fire can burn down a village but it also warms a home.”

Mr Dell said ultimately it improves lives, but companies had to assume the challenges to help improves people’s lives on a global scale.

All organisations, from government to private sectors, would need to reimagine themselves in the new digital age, he said.

Dell Technologies is targeting a larger slice of the cloud market as more companies shift their services to a combination of private and public cloud services.

“We’re growing, we’re gaining, share, investing in the business, paying down debt, innovating across your business like never before,” Mr Dell said. “Our success is a function of deeper, more meaningful engagements and partnerships.”

Microsoft chief executive Satya Nadella took to the stage to announce a partnership with VMware that would see VMware capabilities offered to Azure customers.

“Digital tech is core to the innovation in retail, healthcare, agritech, it’s phenomenal to see that,” he said. “What’s needed to fuel that is great infrastructure.”

A key part of the platform is the new VMware Cloud on Dell EMC service, which is part of Dell’s cloud data centre-as-a-service solution. The new service offers secure, simple and scalable infrastructure delivered to customers’ on-premises data centres and locations.

One benefit of the hub Dell Technologies Cloud brings could be reducing the complexity of implementing cloud technologies. With investments in multi-cloud strategies set to increase over the next two years, Dell is targeting companies that may struggle with the shift to an increasing array of cloud services.

“Cloud is not a destination; it’s an operating model. With Dell Technologies Cloud and joint engineering between Dell EMC and VMware, we are offering a unified hybrid cloud experience,” he said.

“This provides consistent infrastructure and operations at every location the cloud resides-from on-premises data centres to public clouds and the emerging edge-allowing our customers to have greater control of their multi-cloud journey.”

Research from Virtustream showed most companies are using cloud technologies from multiple providers for critical applications in their business, with 97 per cent of the respondents adopting a multicloud strategy, and almost two-thirds are using multiple suppliers for vital workloads.

The study was carried out by Forrester Consulting during April, and surveyed more than 700 cloud technology decision makers at businesses globally with more than 500 employees.

“With the market’s continuing evolution to multicloud, IT decision makers are either hiring or turning to companies with deep expertise in end-to-end migration planning and services as well as deep expertise in automated, secure, highly scalable and high-performance cloud services for their mission-critical enterprise applications.”