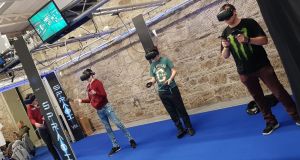 Preparations for the upcoming European Games Week are in full swing, with online takeaway service Marvin.ie coming on board as the sponsor for the esports event.

European Games Week will take place from July 3rd to 7th at the the RDS in Dublin, combining the Dublin Games Festival and the industry focused Dublin Games Summit into one event.

The first two days of the event will be the industry event, bringing 80 speakers from the games industry to the event, including Sega’s head of design and development Nick McKenzie, Warducks’ Nikki Lannen and Charlene Putney, writer for Larian Studios.

The second two days will be open to the general public, with esports tournaments, influencer meet and greets, games showcases and retro gaming.

The name change to European Games Week is to reflect the event’s international focus, its founders said.

“We wanted to build trust back into the games environment and get recognition that Ireland is the place to be,” said cofounder Graeme Moore.

Mr Moore and his cofounder Theo Goyvaerts have plans to organise satellite events in Poland and Belgium next year, but the Dublin-based event will continue, showcasing the best the country has to offer.

The games festival portion of the event will take place on July 6th and 7th, with tickets already on sale. Esports tournaments are focusing on four games this year with Rocket League, Hearthstone, Overwatch and Rainbow 6: Siege offering prize pools. Online takeaway service Marvin.ie, which is part of the Denmark-based Hungry Group, is a long-time supporter of esports in Europe.

Fortnite fans will be able to play the game at the event, although there is no formal esports tournament taking place; organisers are offering two rooms for Apex Legends versus Fortnite play.

Among the guests at this year’s event is Irish gamer RT Game, with more to be announced in the coming weeks.