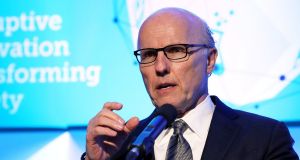 The contract will be signed with National Broadband Ireland, the group led by US businessman David McCourt, above. Photograph: Jason Clarke

The Government will on Tuesday morning sign the controversial contract to extend broadband coverage to over 500,000 rural homes and business.

The contract will be signed with National Broadband Ireland, the group led by US businessman David McCourt, at an event in Co Wicklow on Tuesday morning after a special early morning Cabinet meeting at Government Buildings to approve the plan.

The plan, which could cost the taxpayer as much as €3 billion in the coming years, has been subject to widespread criticism, both from outside and inside Government.

However, Ministers have strongly defended the plan. Following legal drafting of the contract, and approval by the European Commission last week, the final step in agreeing the plan will be taken this morning. It is expected that work on the first connections will begin within weeks.

Ministers have been summoned to a 7.30am meeting at Government Buildings, after which Taoiseach Leo Varadkar, Minister for Communications Richard Bruton and other members of the Cabinet will travel to Glendalough, Co Wicklow, for the signing event with Mr McCourt and executives from National Broadband Ireland.

The plan will provide high-speed fibre broadband to homes and businesses in areas – mostly remote parts of the country – that are not served by commercial operators. The contract will last for 25 years, after which the operator will own the network. Last year The Irish Times revealed that the total cost of the contract to the taxpayer could be as high as €3 billion.

The Government is proceeding with the plan despite a recent vote in the Dáil calling for the contract to be renegotiated to ensure that the network was owned by the State, and not the commercial operator.

Opposition parties condemned the move, although some sources conceded unease at opposing such a high-profile investment in rural Ireland. Fine Gael sources said they hoped the plan would be taken as a sign of the party’s commitment to rural Ireland.

“We have been clear and consistent in our criticism of how this Government has mishandled the rollout of broadband,” a Fianna Fáil spokesman said. “We will await the detail of what is being announced in this latest instalment before commenting further.”

Sinn Féin’s David Cullinane said the Government “should not proceed with a flawed and compromised process”.

“Obviously we need to see a National Broadband Plan rolled out but not one that sees the State carry the risk and without owning the infrastructure at the end of the contract,” he said. The party favours re-examining the process with a view to asking the ESB to undertake the roll-out.

“Most worrying, the private owners will have the right to sell the network after just nine years,” Mr Howlin said.

“This approach is completely at odds with sensible economic decision-making. A clear majority of the Dáil voted against this in support of Labour’s motion that the network should remain in public ownership.”