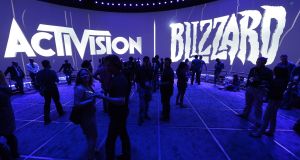 The backlash against Blizzard has been swift, with gamers and politicians weighing in. There has been talk of a boycott, with #blizzardboycott trending on Twitter. Photograph: Michael Nelson/EPA

Sports and politics often cross paths. In recent months alone there have been debates about everything from former England captain Gary Lineker sharing his views on Brexit to American football player Colin Kapaernick’s protest about the treatment of minorities in the US.

It seems esports is no different.

Hong Kong gamer Ng Wai Chung, known as Blitzchung, found himself ousted from a Hearthstone tournament after he voiced support for the Hong Kong protests. The gamer, dressed in a gas mask and goggles, used the phrase “Liberate Hong Kong, revolution of our age” in a postgame interview. The live stream interview was abruptly ended. It cost him prize money he had already won, estimated at $10,000.

However, more severe sanctions to come. Blizzard Entertainment, a unit of US-based Activision Blizzard, has also barred the player from competing in other Hearthstone esports games for 12 months. They say he violated their rules, in this case engaging in acts that bring themselves into “public disrepute”, offend anybody or damage the developer’s image.

The two casters who were conducting the interview have also found themselves out of favour with the company, with Blizzard saying they would end the relationship.

The company, in which Chinese firm Tencent has a stake, reportedly issued a statement in Chinese saying: “We will, as always, resolutely safeguard the country’s dignity.”

It may have cost him $10,000 but Blitzchung says he has no regrets; Blizzard, on the other hand, might. The backlash has been swift, with gamers and politicians alike weighing in. There has been talk of a boycott, with #blizzardboycott trending on Twitter, and not just from the average players disgruntled with Blizzard’s actions.

Mark Kern, a former game designer with the firm, accused the company of trading players for dollars and vowed to give up Classic World of Warcraft – a game he helped develop – until Bizzard reversed its decision. On Twitter, he shared a screenshot of the feedback form giving the reason why he was cancelling his subscription – the silencing of the player. Plenty of others seemed willing to follow his example, or at least said they would be abandoning World of Warcraft.

Perhaps unsurprisingly, given the current focus on trade with China, the move has also made waves in the political arena. In the US, senators on both sides of the political aisle condemned the move. On Twitter, Republican senator Marco Rubio commented: “Recognize what’s happening here. People who don’t live in #China must either self censor or face dismissal and suspensions. China using access to market as leverage to crush free speech globally. Implications of this will be felt long after everyone in US politics today is gone.”

Democratic senator Ron Wyden also expressed his opposition. “Blizzard shows it is willing to humiliate itself to please the Chinese Communist Party. No American company should censor calls for freedom to make a quick buck.”

Fellow games company Epic, meanwhile, rushed to pledge it would not ban players for political speech, saying it supported the right for players to express views on politics and human rights.

Blizzard isn’t the first organisation to face a backlash in China over free speech; it is merely the latest. Apple has found itself under fire in the press for carrying an app and song embraced by the Hong Kong protest movement. Users of iOS 13 in Hong Kong and Macau have, according to reports, found the Taiwan flag hidden from their emoji keyboard. The National Basketball Association found itself mired in controversy after the general manager of the Houston Rockets expressed support for the Hong Kong protesters. In response, China’s broadcasters threatened to pull NBA games and local companies to drop Rockets products.

There is a delicate balance to strike for companies that want to continue to do business in China. With 1.4 billion potential customers, the economic importance of the region to western companies is clear.

And the rules are becoming ever more complex, with a growing list of controversial topics that companies need to avoid for a smooth relationship.

But focusing on not offending Chinese authorities can backfire elsewhere – as Blizzard is finding out. By trying to keep politics out of esports, the company has dragged it front and centre, putting its own actions under the spotlight and giving its rivals the chance to distance themselves from the move.

Perhaps it is impossible to separate the two. But Blizzard’s move, regardless of how it will be perceived in China, has not gone down well anywhere else, giving Blizzard the perception of a company that bows to political pressure. That may be harder to recover from.