Delve into the enigmatic world of 17th-century medicine and magic

Simon Forman was seen as a quack but it didn’t stop him from gathering over 80,000 cases and ‘diagnoses’ 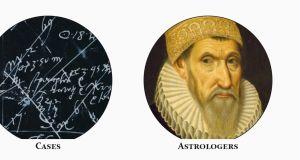 For centuries the calfskin-bound volumes of Simon Forman gathered dust in Oxford’s Bodleian Library. These 400-year old case notes contain “diagnoses” of bewitchment and demonic possession with treatments ranging from bloodletting and physical restraint to onions boiled in milk.

Forman was known for having cured himself of the plague, then setting up shop in London as a doctor who read the planetary positions in order to divine a diagnosis. He was regarded as a quack by medical professionals of the time but it didn’t stop him and his protégé from gathering more than 80,000 cases.

A team of Cambridge researchers spent the last decade digitising these volumes and making 500 of their favourite cases available online. For example, upon consultation of an astrology chart, witchcraft was suspected when a woman’s cow could make neither butter nor cheese. In another case, a man is convinced he is cursed by his neighbour. The evidence? “An ill motion came into his mind saying ‘kisse myne arse’ – and since daily tempted.”

“[There are] thousands of pages of cryptic scrawl full of astral symbols, recipes for strange elixirs, and details from the lives of lords and cooksmaids suffering with everything from dog bites to broken hearts,” said Prof Lauren Kassell at Cambridge’s department of history and philosophy of science.

“The Casebooks Project has opened a wormhole into the grubby and enigmatic world of seventeenth-century medicine, magic and the occult.”