Decawave wins deal of the year at ‘Irish Times’ awards

Company was acquired by Qorvo in $400m deal 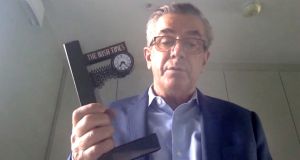 Irish chipmaker Decawave has won the award for Deal of the Year at The Irish Times Business Awards at a virtual ceremony held on Thursday afternoon in association with KPMG.

The company’s staff shared in a €54 million payout after US-based Apple supplier Qorvo acquired it for $400 million in late January.

Employees shared a stake of about 15 per cent in the business through an employee stock ownership plan.

“I’m extremely honoured to receive this Irish Times award. I accept it on behalf of myself and my co-founder Michael McLaughlin and Enterprise Ireland,” said Decawave co-founder Ciaran Connell.

“This technology was always going to be a big boys game, we’ve taken it this far, it now needs to be carried forward by a big organisation, which Qorvo is so we’re extremely pleased to win this award.”

A large group of angel investors, who put money into the business at an early stage, were also among the winners. The 246 individuals held a stake of up to 56 per cent in the business through nominee accounts.

The other nominees for deal of the year were Pointy, which was sold to Google, and the €1.34 billion sale of offices and warehousing group Green Reit to Henderson Park.

Other awards being distributed at the awards ceremony on Thursday include Businessperson of the Year, Company of the Year, Local Enterprise of the Year and Distinguished Leader in Business.

1 The wealth of the Irish – how do your assets match up?
2 KBC Ireland fined €18.3m for ‘unconscionable’ tracker scandal role
3 Dunnes Stores set to enter grocery delivery market
4 Will Facebook walk away from European market after data protection 'hissy fit'?
5 Irish company to test vaccines on volunteers deliberately infected with Covid-19
Real news has value SUBSCRIBE