The Irish Times Business Person of the Month: Ronan Loftus and Ciaran Meghen 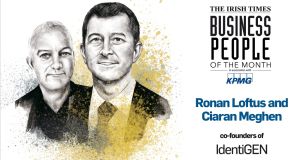 Ronan Loftus and Ciaran Meghen of IdentiGEN have been chosen as The Irish Times Business People of the Month for July, an award run in association with KPMG.

The two co-founders have walked away with a tidy sum after selling their food safety and traceability company to Merck subsidiary MSD Animal Health in a multimillion-euro deal.

While no price was disclosed, the indications are that the business was sold for between €50 million and €65 million.

While MML Capital Partners, which bought into the business with a €12 million investment in 2015, held the largest single stake in IdentiGEN, Mr Loftus and Mr Meghen remained significant shareholders. Both men will receive in the region of €12 million each for their shares once the deal is completed, while MML reportedly more than doubled its money from the investment.

IdentiGEN was founded as a Trinity College Dublin spin-out in 1996. Its technology combines each species’ unique DNA and data analytics to provide an evidence-based animal traceability solution, called DNA TraceBack.

It can accurately and precisely trace beef, seafood, pork and poultry that is verifiable from farm to table.

The company became well known internationally after conducting the tests that identified the European horse meat scandal in 2013. Its tracing technology is used mainly by meat processors – including US giant Tyson Foods – and supermarkets, including Tesco.

As part of MSD Animal Health, the company’s highly-regarded technology is likely to find an even bigger audience.

1 Johnny Ronan loses out on €315m Dublin docklands deal
2 Pre-flight Covid tests possible ‘within days’ if given go-ahead – airports
3 Meath site primed for delivery of enterprise and employment
4 How long can Government afford to keep State pension age at 66?
5 Ryanair and Aer Lingus to cut further flights from regional airports
6 Bank of Ireland takes €169m charge for 1,700 job cuts
7 How much state pension will I get next year?
8 Liquidators appointed to Irish arm of Wirecard
9 PTSB plays down Ulster Bank talk as it sells €1.4bn of loans
10 Doing well out of doing good does not always add up
Real news has value SUBSCRIBE