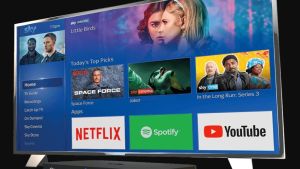 Sky Q HDR: Its improved programme guide is where most people will really feel the benefit.

Where to buy: sky.com

When Sky Q launched in 2016, it brought a new platform that was designed not just for Sky’s pay TV services, but as a multimedia platform that would bring the best content to your home screens.

In the past few years we have seen that come to pass, with the media company doing deals with everyone from online video services YouTube and Vimeo to paid tie-ins with Netflix and most recently Disney to bring the Disney+ streaming service to Sky Q. One service that covers almost everything you need.

But Sky is facing a bit of competition in the market. Its main rival here, Virgin Media, has done some deals of its own, with Netflix also available to its customers, and it has been working on its TV offering to make it easier to access.

So now we have an updated Sky Box, one that comes with High Dynamic Range (HDR) so you get a better picture on everything from your sports content to your streaming services,

What exactly does it do? HDR gives you a larger range of colours and brightness, giving you a much better picture than before. It is used in ultra-high-definition TVs, so not only do you get the benefit of better resolution on your TV, but now you get the better colour and higher contrast into the bargain.

To watch content in HDR, you’ll need a HDR-compatible Sky Q box, a TV that also supports the standard, and content that has been made with HDR in mind. Older Sky Q boxes may not support the technology, specifically (and obviously) the non-UHD boxes.

The box doesn’t look much different to the standard Sky Q device, but on the inside, where it really counts, the differences are obvious.

Sky has plans for its HDR content. Not only will Sky Original content be available in HDR, there are nature documentaries that support the standard and Sky is planning to offer some of its blockbuster movies to customers in the run-up to Christmas in HDR. Streaming services Netflix and Disney+ also support HDR, so expect to see HDR content pop up there too. Sports is set to follow next year.

Do you need it?

HDR is similar to 4K in that for most people it is nice to have, and the extra quality on the signal is nice, but it’s not a deal-breaker. Having said that, once you make the leap, it’s harder to go back.

The new box doesn’t just come with HDR though; it comes with Sky’s new user interface. While HDR is nice to have, most people will probably feel more benefit from the new interface; it’s more noticeable and certainly more useful than an incremental upgrade in quality.

Sky has done some good work here. It makes it much easier to find things on the box, with the new interface offering pages dedicated to each show. That brings the live showings, any recordings on your box and similar shows all into one place, so there will be fewer menu deadends and more opportunity for you to discover new content.

Sports gets their own highlights too, with football getting their own league tables , stats zone for Formula 1, and YouTube content mixed in.

The new box also comes with Sky’s new remote control. It looks similar to the regular Sky remote control, but with one important difference. If you didn’t like the Sky touch remote – and plenty of people didn’t – this is the perfect replacement. Sky has abandoned the touch controls in favour of something a lot more natural – your voice.

The touch panel is gone, but the voice control is now front and centre. Now you can ask Sky to show you a particular channel, or look for films by a particular actor, and you will get choices.

One thing it struggled with was Irish words. Asking it for TG4 as Gaeilge got me to a TV shopping channel; looking for “Daithi and Maura” was interpreted as “dial Mum”, which obviously went nowhere.

The HDR content is a nice addition, but the improved programme guide is where most people will really feel the benefit . There is no more searching for recordings or sifting through menus; it’s all there. Plus the voice search is now much easier to access, and you generally never have to touch the remote to find your favourite shows.

If you have an older box, it may not support the HDR content. And while the voice search is good, it sometimes can stumble over Irish words – so good luck getting it to recognise TG4.

The new remote control, which works with the older boxes too, ditches the touch panel in favour of voice control. Now you can order the TV around just as you do your lights, plugs and other smart home devices.

A worthy upgrade that brings Sky’s platform to the next level.