Datalex shares to be suspended as accounts delayed 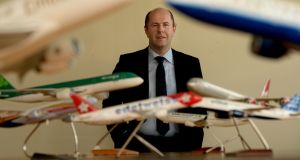 Dublin-listed travel retail software provider Datalex, whose shares have slumped in recent months on accounting irregularities, said on Tuesday that its shares will be suspended from May 1st as it misses a regulatory deadline to have full-year results published by the end of this month.

The suspension will commence on 7.30am from that date and continue until the company’s accounts have been made public in compliance with market transparency rules. It is understood that the full-year report will not be published until the middle to the end of June.

“The board’s imperative is to minimise the delay in the completion of the accounts,” Datalex said in a statement. “The company is in the process of finalising the audit and the results will be announced, and the accounts published, as soon as possible. A further update will be given as soon as the board is in position to do so.”

Shares in the company slumped by 20 per cent to 66.4c on Tuesday. All told, Datalex’s stock has plummeted by 73 per cent since January 15th, when it warned that it expected to post up to a $4 million (€3.5 million) earnings before interest, tax, depreciation and amortisation (ebitda) loss for 2018 and said that its results for the first half of the year may have been misstated.

The company confirmed last month that an outside review by PwC into its finances identified “significant accounting irregularities”. It found that Datalex failed to apply certain accounting standards and incorrectly recognised about $3.5 million (€3.1 million) of service revenue and $2.9 million (€2.5 million) of other revenue in the first half.

PwC also found that there were “material weaknesses in the internal control environment” with the accounting process largely manual and dependent on individual judgment.

Much of Datalex’s accounting issues for last year relate to its accounting for service revenue on a project to overhaul German airline Lufthansa’s digital commerce offering, which had gone way over budget and missed key deadlines. A company is allowed by software accounting rules to book revenue on such contracts based on the estimated stated of a project.

Auditors of the firm’s accounts had previously highlighted risks about how it accounts for revenue and product development costs. In 2017, EY warned that “there was a heightened degree of subjectivity applied by management” in calculating levels of revenue.

Datalex’s main shareholder, billionaire Dermot Desmond’s IIU investment vehicle, bought an additional €3.86 million of shares in the company last month to lift his stake from 26.4 per cent to 29.9 per cent. He also gave Datalex a €6.14 million, 18-month loan carrying a 10 per cent annual interest rate.

The additional funds were aimed at bolstering Datalex’s finances, after its cash levels fell by almost 50 per cent to $8.8 million (€7.8 million) in the year to the end of December.

The company, led by chief executive Aidan Brogan, unveiled plans in February to save up to $10 million (€8.9 million) annually by cutting jobs and outsourced contractor positions.

1 Explainer: what is the row about SF’s multinational tax plan?
2 Getting out from under ‘never-ending’ Celtic Tiger debt burden
3 Britain after Brexit will not be alone, but it will be lonelier
4 Personal insolvency practitioner to pay €6,000 after providing misleading details
5 Banks withdrawing from ATMs – another failure of regulation
Real news has value SUBSCRIBE