Rent the Runway to create 150 high-tech jobs in Galway 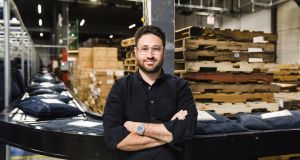 Rent the Runway chief technology officer Josh Builder. The company is creating 150 jobs in Galway but has no plans to launch its service here. Photograph: Amanda Villarosa

Rent the Runway, a US fashion company recently valued at $1 billion (€889 million), is to create 150 jobs in Galway with the opening of its first international technology hub in the city.

The New York-headquartered company, which was established by Jennifer Hyman and Jenny Fleiss in 2009, announced plans to establish a hub in the Republic last month after raising $125 million (€111 million). It did not at that point, however, reveal any further details about its plans.

Having formally established an Irish subsidiary in January, the company has now said it intends to hire 150 engineers and developers over the next three years to coincide with the establishment of what will be its first operation outside of the United States.

“We were looking for a place to expand where we could bring on incredible tech talent, but it was also important that the culture and overall vibe fitted with us as well,” chief technology officer Josh Builder said of Rent the Runway’s decision to set up in Galway.

“Another attractive thing about the city is its strength in terms of data science,” he added.

Mr Builder told The Irish Times that employees in Galway will be working “hand-in-hand” with the company’s US-based R&D teams to tackle core technology challenges that are critical to Rent the Runway’s operations, and which will influence the future of its next generation of services.

The Galway team will be undertaking in-house software development unique to the company as well as offering support for its mobile and desktop platform.

“The goal is to build a strong team in Ireland that can stand on its own rather than it just be something that augments the US operations,” said Mr Builder.

Rent the Runway is seeking to disrupt the $2.4 trillion (€2.1 trillion) global fashion industry by enabling women to rent, rather than buy, designer outfits for events such as weddings. The company, which was last year ranked by CNBC as the ninth most disruptive company in the world, has more than 11 million members and had estimated revenues of over $100 million (€88.8 million) prior to the launch of its subscription service in March 2016. It employs 1,800 people overall.

It carries designer apparel and accessories for rent from over 600 designers which are made available via a subscription service. Members pay $89 (€79) a month for a maximum of four items while an unlimited option is available for $159 (€141).

Rent the Runway, which also has five retail stores in the US, said last month that online subscriptions were up 160 per cent year-over-year last autumn and winter.

The company has built and operates one of the world’s largest technology powered dry-cleaning facility and reverse logistics operation, with sophisticated automation and a complex back-end system covering among other things, rental reservations, returns processing and order fulfilment. All technology and logistics to power Rent the Runway’s operations are currently developed in-house and Mr Builder said he didn’t expect this to change.

The company’s Galway office will be temporarily located at the Portershed hub from next month on, with a more permanent home opening later this year at the newly-renovated Piscatorial School building, overlooking the Claddagh in the city centre.

Unfortunately, for those excited about the prospect of being able to subscribe to Rent the Runway, Mr Builder said the company had no immediate plans to expand its services outside the US.

“The move to Ireland is not a signalling of us bringing our services overseas. It really is for the talent and what it can help us achieve,” he said.