Commission examining whether iPhone maker has complied with GDPR law 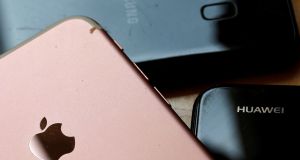 The Data Protection Commissioner has 20 investigations open into multinational technology companies whose European headquarters in Ireland put them under its watch.

The Data Protection Commissioner (DPC), has opened a third privacy investigation into iPhone maker Apple over the last few weeks, a spokesman for the DPC said on Tuesday.

The inquiry is examining whether Apple has complied with the relevant provisions of the European Union’s new General Data Protection Regulation (GDPR) privacy law in relation to an access request from a customer.

It follows investigations opened last year regarding how Apple processes personal data for targeted advertising on its platform and whether its privacy policy on the processing of that data is sufficiently transparent.

The DPC has 20 investigations open into multinational technology companies whose European headquarters in Ireland put them under its watch, with Facebook under the most scrutiny with eight individual inquiries, plus two into its WhatsApp subsidiary and one into Facebook-owned Instagram.

Like Apple, Twitter is also under three different investigations with one each for Google, Microsoft-owned LinkedIn and US digital advertising company Quantcast.

Under the GDPR, regulators have the power to impose fines for violations of up to 4 per cent of a company’s global revenue or €20 million ($22 million), whichever is higher. – Reuters

1 How much state pension will I get next year?
2 Oxford Covid vaccine trials offer hope for elderly
3 Ulster Bank to introduce new card payment controls on app
4 Hurrah for the companies giving staff more time off
5 How long can Government afford to keep State pension age at 66?
Real news has value SUBSCRIBE