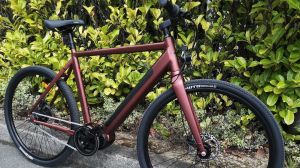 The M1 from Kuma Bikes: the least obvious electric bike out there.

Since the restrictions to slow the spread of coronavirus came into operation, far fewer of us have been getting into our cars. That means fewer vehicles on the road, making Irish towns and cities generally much nicer places to cycle.

Anecdotally, it seems bike shops are feeling the extra demand too, with some in Dublin reporting a massive spike in sales.

Add to that the potential restrictions on public transport when we do all return to work, and the talk of extra road space for cyclists to facilitate a shift to two-wheeled transport, and there are many reasons to start looking at investing in a bike.

But what if you feel you aren’t fit enough to cycle, don’t want to arrive at your destination red-faced and sweaty, or (like me) live in a particularly hilly area? Electric bikes could be the answer.

These aren’t like jumping on an electric scooter, where you push a button and go; you have to do some pedalling to get your bike moving. But the motor will provide you with some much-needed assistance when things get tough, and although you are still physically exerting yourself, there are different levels of boost, depending on the type of bike you have.

Kuma Bikes has a unique thing going for it: it’s an Irish company. That means the bikes are Irish designed and, as far as is practical, Irish made. They don’t look like electric bikes either, not in the way we might expect. The batteries are integrated into the body of the bike – still removable, but less noticeable than your average electric bike.

The M1 is a long-range mid-drive electric bike. Designed for use on the street, it has a range of more than 90km, depending on what level of assistance you require from the motor, which is a 250 Wh Capacity Bafang motor with five different levels of assistance.

It’s all very easy to control. But what is it like to cycle? With the motor turned off, it’s more difficult than normal to cycle the bike, with a little resistance to push against. From the moment you turn the motor on though, all that goes away. Level one gives you a little resistance and the most range from the battery. It’s enough to let you pick up the pace or tackle a small hill without breaking too much of a sweat. At level five, the top level the bike offers, it feels very powerful.

A small push on the pedal gets you moving at a decent pace, which is handy for pulling away from traffic lights at a good speed. One tip: dial the motor down from the top boost when you are coming to a stop, or else the bike tries to get away from you a little if you accidentally hit the pedal.

Charging the bike is easy enough; the port is built into an easily accessible part of the battery. The whole thing unlocks from the frame so you can take it with you to charge if needed.

The good: If you aren’t a fan of electric bikes, these are the least obvious electric bikes out there. The integrated battery is almost unnoticeable, and if you choose the men’s version, the integrated LCD display is another thing that you won’t have to worry about.

The not so good: This isn’t the cheapest mode of transport, even taking into account incentives such as the Bike to Work scheme. That will cover only a fraction of the cost unfortunately – for now at least.

The rest: The lights are wired into the battery power supply, so you can turn them on and off at the touch of a button.

The verdict: An Irish-designed option for electric bike fans that want to ride under the radar.

1 Belgium helps Ireland to a Brexit boon
2 If international visitors are pariahs why are we not testing them on arrival here?
3 ‘My rent here is so low it’s a joke’
4 Varadkar to meet banks in row over interest on mortgage payment breaks
5 Can Grafton Street stop the flood of closures?
Real news has value SUBSCRIBE