Net Results: Not only are most tech company founders not young guys, but most successful tech companies are founded by the middle aged 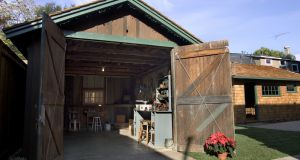 In 1939, David Packard and William Hewlett launched Hewlett-Packard out of a 12-by-18-foot garage on a leafy street in Palo Alto, California. Photograph: Kim Kulish/Corbis via Getty Images

The “young guys founding a company” trope (extra points if in a garage) is one of the most cherished clichés in Silicon Valley. And that’s a problem.

Famously, the garage thing started out as a cheap and practical make-do solution for two enterprising young engineers, twenty-somethings Bill Hewlett and David Packard. In 1939, the two formed Hewlett-Packard in a little garage behind a house in Palo Alto.

Garages didn’t really feature much again for several decades, until the two Steves, Jobs and Wozniak, used the garage at Jobs’ family’s Cupertino house to do some of the finishing work on their first products. Microsoft founders Bill Gates and Paul Allen initially worked out of a garage too. Another wave of “young guys in a garage” arrived with Google, Facebook, and Amazon.

Why such reverence for garages? Making use of the junk-filled space attached to your house – cheaper than renting a Valley office until absolutely necessary – seems pretty obvious.

The larger question is, why such reverence for young guys? Because whatever the blurry truthfulness of all those garage foundings (Apple, as Wozniak has pointed out, was never really founded in a garage at all), the young male founders part of the story is the more worrying Valley myth.

First, age is deceptive. Not only are most tech company founders not young guys, but most successful tech companies are founded by the middle aged.

That will come as a disappointment to many a hopeful youth yearning for billionairedom by 25, but more than one study has shown guys like Jobs, Gates, Brin and Zuckerberg to be rare outliers, not the supersized norm. Most recently, a comprehensive report published earlier this year knocked the young founders fable on the head. MIT researchers Pierre Azoulay and Daniel Kim, working with Benjamin Jones from Northwestern University’s Kellogg School of Management and Javier Miranda of the US Census Bureau, looked at companies founded between 2007-2014, and discovered the average age of a founder was – ahem – 42.

Researcher Vivek Wadhwa found much the same pertained in the previous decade too. His team discovered that the average and median age of successful founders of engineering and tech companies established between 1995-2005 was 39.

“Twice as many founders were older than 50 as were younger than 25. And there were twice as many over 60 as under 20,” he says.

Yet a survey by analyst CB Insights found venture capital firms were twice as likely to invest in companies with founders under 35.

In addition, nearly all VC firms disproportionately invest in men, particularly young men. Companies with a woman on the founding team got 18 per cent of venture funding in 2013, falling to 10 per cent last year.

Experts suggest a number of reasons why money doesn’t go to older founders, including the possibility that VCs gain more control over young inexperienced founders and therefore, better investment terms for themselves.

But that enduring myth of young male founders creating the most successful companies, so firmly implanted in the public and the investor mind, appears to be a very significant factor.

I see three disturbing end results. First, I suspect many high potential companies struggle to get off the ground due to age biases in funding. Second, tech’s lack of diversity and depressing “brogrammer” culture continues to be supported by the default, false assumptions of its support infrastructure and ecosystem.

And finally, companies with so little initial adult supervision, started by young guys lacking in life experience and too often unable to envision the potential negative consequences or misuses of their products and services, seem right now to be the ones that “disrupt”, yes, but in ways damaging to both individuals and society. We’d all benefit if we dumped the young male founder myth – be they in garages or not – once and for all and instead, invested in greater diversity.

1 Cosgrave should give his speech to Web Summit’s partners in Saudi Arabia
2 Ryanair wants Irish courts to block Skyscanner from selling its flights
3 Paschal’s election pitch is based on the economy, Brexit and Project Ireland 2040
4 Election proposals may make the housing crisis worse
5 Court dismisses part of action over claim of ‘catastrophic losses’ on pension schemes
Real news has value SUBSCRIBE