5G goes live: the State’s first network gets switched on

After much hype, 5G has finally arrived as Vodafone Ireland goes live in five cities 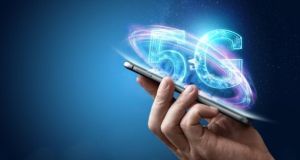 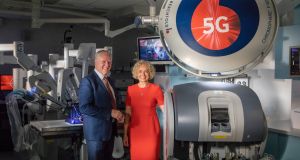 Vodafone expects to have rolled out its 5G mobile network nationwide by the end of next year. However it has again stressed that the new network cannot be considered as a possible replacement for the National Broadband Plan (NBP).

The company became the first mobile operator in the State to go live with a commercial 5G service on Tuesday with coverage restricted to certain parts of Dublin, Cork, Limerick, Galway and Waterford. It said it would expand the network to other locations over the coming months with a full roll-out forecast by the end of 2020.

While Vodafone said it expects 5G to eventually be available even in hard-to-reach rural locations, it reiterated that it should not be seen as a substitute for the NBP, which has still to get off the ground after a sequence of controversies and delays.

“The NBP goal is to provide dedicated guaranteed high speed bandwidth to every home and business in Ireland. 5G, being a mobile service technology, is delivered over the air and hence the service by its nature will be shared,” a Vodafone spokesman told The Irish Times.

“ 5G could also be used as interim solution to the NBP ambition. We do not consider it an alternative option more a complimentary one,” he added.

The technology is the next generation of mobile connectivity which succeeds the current 4G and older 3G systems. It brings faster speeds of over 1,000 megabits per second, as well as increased security, reliability, and perhaps most importantly, lower latency of less than five miliseconds.

The latter refers to the time it takes to get a response to information sent. Having lower latency enables multiple devices to be easily connected together in a move that is expected to lead to a sharp rise in the number of internet of things (IoT) devices in circulation. In addition, it could speed up the introduction of new technologies such as self-driving cars and robotic surgery.

The initial roll-out of 5G makes the technology available to about 300,000 people across the State. Those wishing to upgrade will need a new smartphone with Vodafone offering either the Huawei Mate 20X 5G or the Samsung Galaxy S10 5G handsets to customers. Customers who already own a 5G-enabled phone can access the new network simply by contacting the operator and asking to switch to it.

Monthly price plans will cost €25 per month for a SIM-only plan under an introductory offer, and from €40 with a new handset.

Rival Eir is reportedly set to launch its own network next month while Three Ireland is also expected to begin a limited 5G rollout later this year.

1 PTSB plays down Ulster Bank talk as it sells €1.4bn of loans
2 Up or down – how much is your Local Property Tax this year?
3 Housing crisis will be permanent unless there is radical rethink, industry warns
4 How much state pension will I get next year?
5 Irish tech company Asavie acquired by Nasdaq-listed Akamai
Real news has value SUBSCRIBE