OnePlus 7 Pro: a pop-up camera appears only when needed 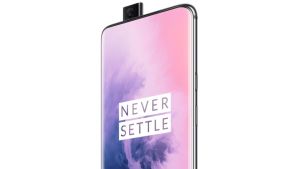 OnePlus has a lot of support from Android fans.

Product name: One Plus 7 Pro

I’ve said it before but it bears repeating: smartphones are blending in to one another these days. There are big screens and bigger screens, fast chips and excellent cameras, and batteries that are supposed to last but as time goes on, fail to make the grade. It’s hard for smartphones to stand out from the crowd simply in design terms; they are all morphing into one homogenous aesthetic, one with curved screens and shrinking bezels.

That’s where customer loyalty comes into play. Like Samsung with its Note phone, OnePlus has a lot of support from Android fans. This is the company that once sold its phones on an invitation basis, undercutting the competition on price while still delivering excellent features. The latter helps, as does the company’s approach to Android software with OxygenOS, and its willingness to take fan feedback on board.

From the initial OnePlus One in 2014, billed as a flagship killer, to the latest OnePlus 7, the company has managed to hit the right notes with consumers, and, when they didn’t, adapted quickly to change it . The competition in the market is fierce though, and OnePlus has adapted its new handset to take that into account. The OnePlus 7 Pro has an edge-to-edge Amoled display that comes in at 6.67 inches with a Quad HD+ display. It’s curved too, like Samsung’s S10+, and the fingerprint sensor is under the display.

There are a few things that set the OnePlus 7 Pro apart from the competition though. The first thing is the camera. I’m not talking about the rear-facing camera, which has a by-now familiar triple camera set-up, although the 48 megapixel, 3xz optical zoom and ultra wide angle lenses do give you some nice (if not spectacular) photographs. The nightscape shots are less impressive, feeling a bit over-processed and soft at times.

I’m not sure how I feel about it. On one hand, it’s not on the screen, taking up space or dictating the design. On the other, the idea of a pop-up camera seems a little retro.

Fans of 4K video will like the ability to shoot in ultra high definition with the rear camera, although the videos are limited in length to 10 minutes. The pop-up camera shoots in 1080p.

Everything has been designed to be unobtrusive, taking up as little screen space as possible. The speakers and ear piece for the phone are so subtle you can barely notice them, but it doesn’t make a difference to either the sound quality or the volume. For something so compact, it’s startling. OnePlus included Dolby Atmos technology in the 7 Pro too.

Coming back to the display though, one of the key differences between the OnePlus 7 Pro and the competition is the 90Hz refresh rate, up from the standard 60Hz. Why should you care? It looks smoother, even when just scrolling through the list of apps.

It takes 60 minutes to charge the battery to full with the 30 watt Warp charger. That may be less impressive than the Note 10+ and its 30-minute charge time, but the key thing here is that the Warp charger is included in the box. A bird in the hand, as the old saying goes.

Speaking of things that are included, you still get a case for the phone in the box too, which will protect its shiny exterior (and stave off the fingerprints). It’s not something that you will use long term, and there are far nicer cases available, but it will hold you until you find something a little more suited to your tastes.

You can’t expand storage, although the phone is dual sim, and battery life didn’t blow me away, although you can improve that by taking down the screen resolution and the refresh rate.

OnePlus has managed to create another smartphone that holds it own for the most part with rival flagships. The 90Hz refresh rate makes everything feel smooth, the Snapdragon 855 is speedy and the 12GB of RAM keeps everything ticking over. The cheaper version comes with 6GB of RAM.

No wireless charging, although that may not be a deal breaker for some as wireless charging isn’t exactly everywhere yet. Also, extra features means extra cost; it’s still not approaching its rivals though.

Drop the phone while taking a selfie and the phone will detect the fall, retracting into the phone presumably to avoid snapping it off. It’s a nice touch.

If you don’t mind sacrificing a few extras for the sake of a far lower price tag, the OnePlus 7 Pro should be your next Android phone.