Trading in shares were suspended in May 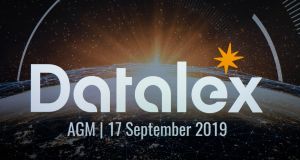 A resumption of trading in Datalex shares has been affected by the auditors of the 2018 annual report, EY, refusing to offer an opinion on the company’s accounts.

Irish businessman Tom Anderson, owner of the Empire Cinemas chain in the UK, has build up 5.35 per cent stake in Datalex in off-market transactions as shares in the travel retail software group remains subject to a trading suspension on the stock market.

The move follows Dublin-based businessman Nick Furlong and his Pagaent Holdings vehicle adding to their stakes in December as Dutch hedge fund Kabouter Management was selling off its 9.3 per cent Datalex holding off-market. Mr Furlong and Pagaent now own a combined 9.54 per cent of the business.

Mr Anderson, a member of the Ward Anderson Irish cinemas dynasty, bought shares through Empire Cinemas’ parent company, Cinema Holdings Limited, on December 20th, Datalex said on Tuesday. That same day, London-based Highclere International Investors also sold its 5.13 per cent interest as it tidied up its portfolio before the year-end.

Datalex, which was the subject of an accounting scandal last year, saw trading in its shares suspended in May as it failed to publish 2018 results by a regulatory deadline. A resumption of trading has been affected by the auditors of the 2018 annual report, EY, refusing to offer an opinion on the company’s accounts.

It is hoped that the appointment of Deloitte as auditors last month will ultimately pave the way for on-market share trading to resume.