It’s cutting it fine, but there are still some tech toys out there for kids 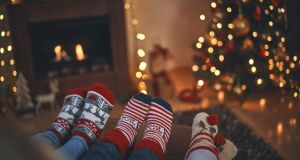 Have you checked that list twice? There may still be some gaps on there, particularly for younger members of the family. Tech can combine education and entertainment in one – here are a few suggestions.

This globe was only in the Irish Times office a few minutes before we actually learned something. So imagine what it could do for your children. Leapfrog’s Magic Adventures Globe mixes education and fun, teaching children (and adults)about the world we live in. Press the stylus anywhere on the globe to hear facts about different locations, covering cultures, animals and habitats. There is a 7cm colour screen on the front of the globe that will display video footage from the BBC, and animations that help children through interactive games and activities.

Where to get it: Smyths Toy Stores

Have you tried keeping your children away from your iPad? It’s not an easy task. If you are going to crack and let them at it, you could choose an educational game such as Osmo. The Osmo Genius Kit gives you a number of games that open your child up to science, maths, art and more, using a mix of physical pieces and the app. There are five included in the pack, plus all the pieces you’ll need to play: Numbers, Tangram, Newton, Words and Masterpiece.

Where to get it: Apple. com

For older children, there is the Sphero SPRK+ Robotic Ball. It teaches children the basics of robotics and coding without getting too complex, making it fun. LED lights and sensors such as a gyroscope give you multiple ways to use the robot, with the app playing a major role here. It’s bluetooth enabled, designed to connect to your phone or tablet, and has a rechargeable battery.

Where to get it: Very limited availability in Harvey Norman in Blanchardstown and Waterford.

Forget your GoPro - for kids, the Vtech Kidizoom Action Cam HD is the better choice. Not only is it far less expensive than the adult version of the camera, it is designed with children in mind. So not only is it reasonably durable (though you will need the waterproof case and floating mount for underwater photos), it has visual effects, games and features such as the ability to create stop motion videos. It comes with a number of mounts so your child can attach the camera to their scooter, bike or skateboard and take photos or videos while they are on the move.

Where to get it: Smyths Toy Stores

Garmin’s Vivofit Jr 2 isn’t just an activity tracker. Sure, it tracks steps, but it also works as a sort of digital rewards chart for your child, giving them gold coins for completing tasks you set for them. The key thing is the parent app, which you download to your own smartphone and add the band. The Vivofit Jr 2 has two important things: a soft adjustable band, and a battery that lasts more than a year. There’s no charging to worry about, and once the battery wears out, you can replace it. It’s also swimproof, and comes in a variety of bands, including Elsa and Anna from Frozen, Star Wars and Spider-Man.

Where to find it: Harvey Norman stores throughout the country.