What makes TikTok tick – and is it a social timebomb? 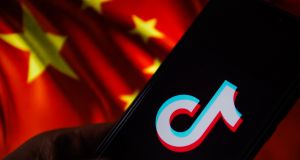 TikTok, the viral video app, has been installed nearly 1.5 billion times since launching in 2017. Photograph: Omar Marques via Getty

If you haven’t heard of TikTok, there is a good chance you aren’t the app’s target market. The viral video app has taken the social media scene by storm, racking up users and creating a whole new generation of “app famous” celebrities.

And it could be threatening the comfortable positions of the established social media companies by scooping up that all-important younger user base – 41 per cent of TikTok users are under the age of 24.

The app itself is strangely addictive. Get stuck in a TikTok loop and you find yourself swiping from video to video without thinking.

Among the clips that have captured the public attention this year are a science experiment conducted by YouTube star David Dobrik, a man doing surgery on a banana and a swimming pool stunt gone terribly wrong.

Opening the app brings you immediately into your feed, where you are greeted with auto-playing clips of anything from a man jumping from a swing into his trousers, to pranks involving blasting an air horn at people on their phones to scare them into dropping them. Or maybe it is Victoria Beckham dancing to Spice Up Your Life with son Romeo, or numerous makeup and transformation videos. It’s like video roulette.

TikTok is creating its own celebrities, with some users boasting hundreds of thousands of views on their videos

TikTok’s rise has been meteoric. A couple of years ago, few had heard of the app. Created by Chinese company ByteDance, it first launched in September 2017. However, it really took off in 2018 when ByteDance bought music app Musical.ly and merged it into the TikTok platform.

That move gave ByteDance a readymade young user base. The Chinese firm integrated elements of Musical.ly that had proven popular with younger users, including the ability to lip-sync videos to short clips of music and comedy.

TikTok has been installed nearly 1.5 billion times since launching in 2017. In the US, the app recorded growth of 38 per cent in new users in the third quarter, with a total of 11.6 million signing up.

Will Smith, Tony Hawk, Des Bishop, Ariana Grande and the Rock are among the celebrities who have TikTok accounts, while closer to home, RTÉ 2FM and the Zoo Crew on Dublin station Spin 1038 have TikTok accounts. And the app is also creating its own celebrities, with some users boasting hundreds of thousands of views on their videos.

Record companies credit TikTok with minting a new generation of music stars, including Old Town Road singer Lil Nas X. As it has attracted hundreds of millions of users with their music, however, those companies are now demanding ByteDance increase the licensing fees it pays.

You may be perplexed by the whole thing, but rival social media companies will be keeping a close eye on TikTok and its most popular features.

When it looked like Snapchat was sweeping up younger users from the likes of Instagram and Facebook, Facebook fought back. In 2016, it launched Instagram Stories, a feature that now has 500 million daily active users. It also brought in disappearing messages and filters for stories – all features that were credited with Snapchat’s popularity.

A mixture of the competition upping the ante and a widely disliked redesign stopped Snapchat in its tracks. But it hasn’t disappeared off the scene – recent results show the service gained 7 million users in the third quarter of the year, to bring its user base to 210 million.

Facebook has already tried a similar approach with TikTok. Its short video app Lasso was quietly launched in November last year; it has not yet gained the same traction that TikTok has, and it is only available in the US.

Part of the problem with Facebook and its associated companies is the backlash from its recent scandals. According to Glenn Mehta, head of the marketing, advertising and digital marketing department at Technological University Dublin and author of Infinite Ripple: The Social Media Revolution, it can be as simple as people are getting tired of handing over their user data to be monetised by big tech companies. And although TikTok may not be immune from that, it’s new enough not to have been beset by the same issues as the incumbent social media firms.

One thing that could hurt social media platforms is an increasing crackdown on what is considered “acceptable” behaviour. That can soon be perceived as “nannyish”, Mehta said. “When what was perceived as a cool brand starts doing that, people will start to turn away,” he said. “People say ‘enough is enough, we’ve given you enough, maybe it’s time to look elsewhere’. They start to look for the next big thing.”

That may well be TikTok. Mehta has also noted a trend towards TikTok videos appearing in Instagram feeds. “It’s interesting to see that shift,” he said.

But could TikTok be about to hit some troubled waters? The app has not been without its problems. Its Chinese ownership has become a lightning rod for criticism as tensions rise between the US and China over trade and technology. American politicians have expressed concerns about the app’s handling of user data and censorship of politically-sensitive expression, and US officials are reviewing whether ByteDance’s $1 billion acquisition of startup Musical.ly two years ago poses a national security risk.

In recent weeks, a California college student sued the viral video service for – she claims – secretly funneling her personal information to China while using her videos to create an online profile for targeted ads.

Misty Hong alleges TikTok harvested her videos, gathered personally identifiable information, then transferred that information to servers in ByteDance’s home country without her consent. The filing did not provide any evidence to back up the claims.

For its part, TikTok has previously said it does not send information to Chinese servers, using servers in the countries where TikTok is available instead. However, with increasing scepticism of those claims, it is an issue that is sure to resurface again and again.

TikTok is certainly following a similar path to its rivals. Facebook has had its own problems over data use, with the most serious being the Cambridge Analytica scandal. The lingering effects of that episode on Facebook’s reputation is something it has yet to shake off.

In a world where Facebook and Twitter have become echo chambers and mediums for the spread of much disinformation, TikTok may seem like a welcome change. While Twitter has banned the paid promotion of political posts completely from its platform, Facebook has come under fire for saying it would not pull political ads that contained lies. Instead, it wanted to let readers make their own minds up. It was a decision that has not been welcomed.

TikTok seems remarkably politics free. However, it has come in for its own share of criticism surrounding political speech. In recent weeks it was accused of censoring content regarding the Hong Kong protests, and TikTok ignited a furor for suspending – then restoring – the account of New Jersey teenager Feroza Aziz for posting a series of videos that rebuked China’s treatment of Uighur Muslims. The company later blamed a “human moderation error”.

And that is before you get to the accusations that TikTok facilitates bullying. The open nature of the platform – you can message anyone with a public account – means users are often putting their videos on public display, a decision that can bring unwanted attention. TikTok accounts are public by default.

There have been missteps too. In recent weeks, the company admitted it was “wrong” to reduce the visibility of users on its platform it regarded as “vulnerable” to online bullying. Moderation guidelines for the app unearthed by German site NetzPolitik.org show it limited the visibility of users who were disabled, overweight and LGBTQ+.

In some cases, this meant videos were only visible in the country where they were uploaded, while others deemed particularly vulnerable were put into a “not recommended” category so their videos would not appear in an algorithmically compiled section of the app where others can discover content.

TikTok said its approach was “blunt” in its early days as it sought to address bullying, but added that the policy was never designed to last forever.

“Early on, in response to an increase in bullying on the app, we implemented a blunt and temporary policy,” a spokesman said. “This was never designed to be a long-term solution, and while the intention was good, it became clear that the approach was wrong. “We want TikTok to be a space where everyone can safely and freely express themelves.”

Quite how freely people can express themselves on TikTok remains to be seen. – Additional reporting: Bloomberg, Reuters