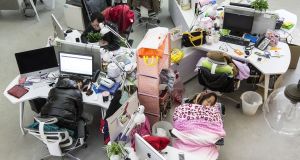 Workers at a Chinese tech company take a lunchtime nap. A campaign against long working hours by professionals in China’s technology sector has been trending on the internet worldwide.

A campaign against long working hours by professionals in China’s technology sector has been trending on the internet worldwide in a rare display of labour organising across countries.

The “anti-996” campaign opposes employees working shifts of 9am-9pm, six days a week, which are commonly required by the country’s tech giants.

The movement is being organised by volunteers on collaborative platforms – primarily Microsoft’s GitHub, used for code-sharing, as well as Slack, used for messaging.

The campaign has grown in the space of a week to become the second-highest bookmarked project on GitHub, with more than 160,000 people watching it as of Wednesday. The issue has also hit the top trends on Weibo, China’s microblogging platform.

China’s tech giants have recently announced a wave of layoffs and cuts to employee benefits as financing slows. In recent years, stories have gone viral on the internet of young engineers at major firms dying suddenly, with commenters speculating that stress was a contributing factor.

Tech giants Alibaba, JD.com and ByteDance are among those named in the project’s “blacklist”.

“We will not force employees to work overtime, but we encourage everyone to fully invest themselves,” JD.com said in response to media reports of employees complaining that their 996 schedule was a way of forcing resignations. ByteDance did not immediately respond to requests for comment and Alibaba declined to comment.

On Tuesday, the 996 campaign led the state-run Communist Youth League’s newspaper to write an editorial saying that “dissatisfaction has reached a turning point”, and society was facing up to the issue of how to reduce pressure on young people.

“There’s going to be a social shift around the use of labour in tech,” said Suji Yan, an advocate of the anti-996 campaign who has founded a start-up, Dimension.im, in Shanghai. “Some staff work so hard and get nothing to show for it. You have to obey local laws at the very least.”

The movement’s name on GitHub, 996.icu, stands for “an ironic saying among Chinese programmers that if you follow a 996 working schedule, you’ll end up getting admitted to the intensive care unit”, its homepage explains.

“This is not a political movement,” cautions 996.icu’s GitHub page. The Chinese government has clamped down on any organised activities that could turn into a social movement and has arrested a wave of student labour activists over the past year.

“We firmly uphold the labour law and require employers to respect the legitimate rights and interests of their employees,” 996.icu adds.

Yang Baoquan, a labour lawyer at Beijing Zhong Yin Law Firm, said companies had many ways of getting around labour-law complaints, such as putting staff on “flexible working hours”.

“The local department of labour also has to consider other things: whether this company is influential in this area, whether it is providing a lot of jobs and paying a lot of tax,” Mr Yang added.

The anti-996 project grounds itself in the open-source movement, which supports collaboration and the free exchange of information, particularly in software. It promotes an open-source “anti-996” licence that companies can attach to their software to signal their stance on labour standards on the condition that they strictly comply with local laws.

The writer of the anti-996 licence, Katt Gu, and her collaborator Mr Yan are the only named people in the project’s documentation.

“Suddenly, developers all across China started using the licence,” said Ms Gu. “I’m really excited – this morning I got an email from a programmer saying thanks.

“We don’t want the project to be credited to us, though,” added Ms Gu. “We’re just lucky to be involved.” – Copyright The Financial Times Limited 2019