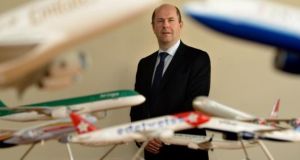 Datalex chief executive Aidan Brogan. “Datalex is now positioned to execute on an exciting phase of growth, and I am confident that we will do so in 2018 and beyond”

Datalex, the listed travel software company in which businessman Dermot Desmond has a stake, has said it is looking to deliver double-digit growth in revenue and adjusted earnings over the next few years after reporting a strong performance for 2017.

Datalex said last year saw continued progress on a number of key deployments, including a new customer win in the Chinese market and a deal to provide a platform for the Lufthansa Group.

“The digital transformation of the airline industry and broader travel sector continues to grow at a significant pace, presenting more opportunities for us to expand. Our first customer in the loyalty market represents an exciting example of new opportunities across other travel verticals. Datalex is now positioned to execute on an exciting phase of growth, and I am confident that we will do so in 2018 and beyond,” said chief executive Aidan Brogan.

The company recorded a 29 per cent increase in services revenue to $34.6 million, driven primarily by current deployments at the Lufthansa Group and JetBlue Airways. Platform revenue grew 3 per cent to $27.2 million over the same period.

On a like-for-like basis the underlying platform revenue growth in 2017 was more than 10 per cent.

“With the commencement of platform revenue at the Lufthansa Group and our other new customer deployments, coupled with continued organic growth across our customer base, we are projecting double-digit growth in platform revenue annually over the next three years,” the company said.

Total cash balances at the end of the year was $16.7 million. This is down from the $24.3 million recorded a year earlier due to a number of factors including an increase in product development costs and in debtors and unbilled revenue.

“2017 was a year of strong performance and investment for our business, and was our eighth consecutive year of double-digit growth in adjusted ebitda. The investments we have accelerated in our platform, including the next generation capabilities we are bringing to the Lufthansa Group, will strengthen our competitive position and help drive our future financial performance,” Datalex said.

The company, which declared a dividend of 5 cent per share, also signalled a rise in dividends for shareholders next year.

3 Elliott makes firm offer for Aryzta and has financing - report