Shares of Google parent Alphabet could return to record levels

Company reports on Monday after losses in tail end of 2018 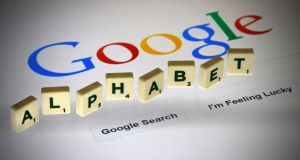 Profit margins narrowed in Alphabet’s fourth quarter as a result of capital expenditures jumping 80 per cent.

Shares of Google parent Alphabet could return to record levels if first-quarter results Monday afternoon show that the company’s margins are stabilising.

Alphabet has lagged behind the rest of the co-called FAANG quintet in 2019, but it could emerge as the first of the group to fully recover from losses incurred in the tail end of 2018. Shares have risen almost 30 per cent off a December low, bringing it within 1 percent of record levels.

Analysts are broadly positive on the company – none of the 42 firms tracked by Bloomberg recommend selling the stock – as well as the results. Revenue is seen rising more than 20 percent from the year-earlier quarter while earnings are expected to grow 2.4 per cent.

“We are encouraged by recent commentary from the company around improving the monetisation of Maps and mobile search ads via Google Assistant,” wrote Goldman Sachs analyst Heather Bellini, who affirmed the company’s place on Goldman’s Conviction List.

She added that there was “an upside bias” to average revenue expectations, although Goldman expects operating margins to contract by about 45 basis points to 22 per cent. That comes as expenses are seen growing 21 per cent.

Profit margins narrowed in Alphabet’s fourth quarter as a result of capital expenditures jumping 80 per cent.

Barclays analyst Ross Sandler wrote that while few question the long-term bull case for Alphabet, the near-term debate “hinges on how much improvement Google may see in operating margins in 2019.” He added that the current situation “reminds us very much of the set up in early 2015, whereby Google operating margins went from imploding to stable, which set the stage for a 40 per cent+ move higher for shares.”

While he doesn’t expect a move of a similar magnitude, he anticipates “some upside from here” and recommended adding to positions.

Stifel’s Scott Devitt expects margin trends “to begin to stabilise in 2019 as headcount growth decelerates and hardware and YouTube content costs normalize.” Wedbush analyst Michael Pachter wrote that he was “confident” that the company “can manage its operating expenses to generate ever-increasing profitability.”

As always, the company’s ad business will also be a key focus. Bloomberg Intelligence wrote that Google’s mobile ads “will likely sustain the momentum of last year,” and that Facebook’s recent results “underscore a strong demand environment.” The number of clicks on ads that Google ran on its own services surged 66 percent in the fourth quarter.

Earlier this month, RBC Capital Markets analyst Mark Mahaney wrote that a record 74 percent of marketers allocated at least a fifth of their budgets to online, citing a semi-annual survey, while 36 percent – also a record – allocated half their budgets. Facebook and Alphabet were placed “well ahead of peers” when it comes to the platforms’ return on investments, he said. – Alphabet

1 Moving in and out of lockdown is a recipe for economic disaster
2 Objectors stall production of enough timber for 5,000 houses
3 Shed Distillery in Leitrim to open €3m visitor centre next month
4 Revised help-to-buy scheme opens for applications
5 Urban micro-farm growing vegetables in heart of community
Real news has value SUBSCRIBE