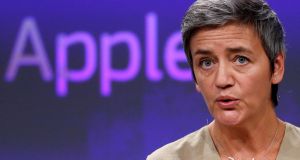 European Commissioner for Competition Margrethe Vestager: bad publicity around the Apple tax bill could put Ireland on the back foot in defending our tax structure. Photograph: François Lenoir/Reuters

It made for good headlines. “Ireland to be hauled before European Court of Justice.” But is the European Commission announcement following Ireland Inc’s failure to complete the collection of €13 billion in disputed back taxes from tech giant Apple anything more than a ritual show of strength?

There is no doubt that competition commissioner Margrethe Vestager suspects Ireland has been dragging its heels somewhat in its pursuit of Apple. It’s not unthinkable. Ireland is by no means unique within the EU, but you have to assume our European partners are, by now, well accustomed to the practicalities of “Irish solutions” to unwanted problems.

The Government disagreed vehemently with the original finding and is, in any case, loathe to offend a highly esteemed member of our foreign direct investment community and a major employer in the State.

Ireland had been due to get hold of the money by January last, according to the original commission timeline. And it is pretty standard practice for the commission to start sabre-rattling on the anniversary of such announcements.

Current thinking is that a hearing could be expedited, as the recruitment of additional staff is speeding up the progress of cases through the ECJ. But, even then, it is likely to be closer to summer than to the new year before Ireland defends its position.

A ruling would then have to go back to the commission for the imposition of fines, if any.

But the latest Government timeline suggests that Apple will have paid over the contested bill by March, before the case even gets to court. That would render the entire process moot. So is it all just a case of grandstanding?

Maybe not. Ireland is facing what will be, by consensus, the chill winds of Brexit. It will rely on support from the other 27 EU states. Finding itself featuring consistently in unwelcome headlines on corporate taxation could put us on the back foot in defending our tax structure.

But then, perhaps that’s what the commission intends.