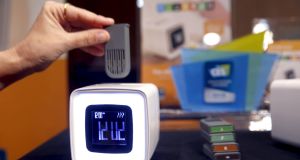 An aroma module is inserted into a Sensorwake alarm clock at the CES. The clock releases the scents at the programmed time but will also sound an auditory alarm if you don’t wake up after three minutes. Photograph: Reuters/Steve Marcus

Fancy a pair of sports shorts that can track your performance? Or how about an alarm clock that wakes you up to the scent of the jungle?

The wackier side of the tech world is in the spotlight in Las Vegas this week, which is hosting the world’s biggest trade fair. An estimated 150,000 attendees are trekking across the 200,000sq m of exhibition space at CES 2016 in search of the latest devices and innovations due to top wish lists this year.

Yet for all the weird, wonderful and downright wacky devices and apps being pitched, the lure of the Las Vegas event demonstrates the role of tech and computing in everyday life these days.

What was once a niche event for techies – a spin-off from the (then) more significant Chicago Music Show – it now permeates all sorts of industries, from media, marketing and motoring to healthcare and retailing. There was a veritable traffic jam of car giants eager to claim their software would herald the new age of autonomous driving. Drones and virtual reality headsets will dominate the stages.

The good news for Ireland’s tech ambitions is that we have headlined on several of the big-news stories to emerge from Vegas so far. Top billing, for example, went to the deal between L’Oréal and Liam Casey’s PCH International to develop personalised beauty products and connected devices.

Intel showcased its new, button-sized Curie chip, the key to its plans to compete in the so-called wearable revolution. The chip was designed in Ireland.

While Irish start-ups will have to fight hard to be heard amid the often wild claims being made by rivals, Las Vegas is the centre of the tech world this week.

For pundits and investors, identifying a winner remains as much a gamble as the city’s casino tables. CES has in the past lauded 3D televisions and other tech culs-de-sac. As one commentator said yesterday, when it comes to CES, often what happens in Vegas stays in Vegas.