Can the inventor of the web save its future? 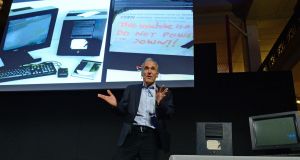 In 1989 Tim Berners-Lee’s then CERN boss Mike Sendall took a look at his proposal for a linked information management system and deemed it “vague, but exciting”.

Thirty years later, 50 per cent of the world’s population is connected to the web. What will the next 30 years hold?

“It’s not for us to guess,” said Berners-Lee, talking to an audience of thousands at London’s Science Museum, where official birthday celebrations for the web were held last Tuesday.

Tim Berners-Lee is an icon, he’s somebody trying to maintain freedom of the internet when nobody else wants to

This idea of creating a web for the people was a core theme of the celebratory event. Mixed in with the tributes to Sir Tim and nostalgia over the internet dial-tone and Keyboard Cat was a message that web users need to care about maintaining net neutrality and keeping the web as free and open as possible in the face of monopolisation by tech giants.

But did the crowd care about this? Had they queued outside for hours to hear about the Web Foundation’s Contract for the Web? Some had. I asked the most enthusiastic members of the public – those right in front of the stage – why they had joined in in the web’s 30th birthday celebrations.

“Tim Berners-Lee is an icon, he’s somebody trying to maintain freedom of the internet when nobody else wants to,” said Simon, a computer science teacher and an advocate for an open web.

“Everyone else wants to close it down and own little bits. The reason why he is here today is he wants to tackle the changes that will go ahead if people don’t say: ‘Excuse me, the internet doesn’t belong to anybody, it’s for everybody.’”

Others came for the experience: “This is like being at a gig. It’s like a rock concert for nerds,” said physics graduate Alison, whose professors were at CERN during the birth of the web.

“I don’t think anybody here would be offended by you saying that either,” Simon interjected.

Alison said she was going to bring actual, edible internet cookies to work the next day for colleagues who had stared blankly when she told them she was off to celebrate the web’s birthday. “For those who have never heard of [Tim Berners-Lee and the history of the web], now I can shove it down their throats!”

Bona fide nerds aside, what about millennials? Surely they don’t have any reason to care about what came before Instagram and Snapchat? It all started before many of them were even born – and they grew up in a connected world.

“The stuff [Tim Berners-Lee] created is used all across the world – it’s the backbone of our society,” said fan Michael, adding that asking fellow millennials if they care about Berners-Lee and the web’s 30th birthday is “a bit like asking if they know or care about how physics works – they might not but their entire world revolves around it”.

“Isn’t that the sign of a great invention – that the inventor becomes irrelevant as the invention takes front stage?”

That said, the pair were present to celebrate because they considered themselves fans of web culture and history in the same way someone enjoys any fandom in popular culture.

“It’s like most people who see these Marvel films not knowing who the characters are, [but] meanwhile, there are those who grew up reading the comics and this gives them an extra level of enjoyment from the films. That said, you don’t necessarily need to know who invented Black Panther in order to enjoy the film,” explained Robert.

And it wasn’t just the audience geeking out. Several speakers talked about how the web changed their lives, giving them an outlet for their pursuit of knowledge and love of science and technology.

Dr Anne-Marie Imafidon was a child maths prodigy and is the founder and CEO of Stemettes, a social enterprise across Ireland and Britain that encourages girls and young women to pursue careers in science, technology, engineering and maths.

She talked about her fondest childhood memories of coding webpages in HTML.

“I built my first website aged about eight or nine years old and for me it was just so fascinating and amazing. You could look at webpages, view the source and see the HTML tags behind the page. I don’t know if anyone else had a digital scrapbook when they were younger, maybe just me! I was taking apart webpages as opposed to taking apart the VCR player.”

She says working with young girls through Stemettes feels like she is continuously reliving that moment when she made her first web page: “Whether it’s prototyping web apps or building chatbots they’ve created, for me, the thing I love most is seeing the excitement on their faces, not just for what they’ve made but for the fact that others around the world are able to access it.”

Adding to the theme of the web as a tool for intellectual curiosity and creativity, another former child prodigy paid his respects. At 14 years of age, Taylor Wilson was the youngest person ever to achieve nuclear fusion (in his parents’ garage). He googled how to do it first, of course.

Access to the web, says Wilson, has led to this incredible ability for the wealth of human knowledge to be available to so many people. This has had a profound impact upon his life.

“[The web] allowed me to learn about nuclear physics and the structure of the universe and all these weird particles and forces that make up the world around us. And I became fascinated. I realised this was something I wanted to spend my life doing. I felt like I could make a difference. And it was enabled by this incredible technology that turns 30 years old today.”

Wilson is part of the NewNow, a Richard Branson-led initiative designed to bring together the leaders of tomorrow. It has just joined forces with Berners-Lee and the Web Foundation to work on the Contract for the Web that is seeking co-operation from governments and technology companies in ensuring a fair, affordable web with adequate privacy measures and ethical design.

Is he up to the challenge? Mayor of London Sadiq Khan said at the event that there is no question Tim Berners-Lee is one of the greatest, most pioneering minds of the past century, someone who can be put alongside the likes of Albert Einstein, Marie Curie, and Alan Turing for the influence they’ve had on the globe.

“For me, what makes Sir Tim’s story so inspiring and so exceptional is how he put openness at the very core of his invention. The web was always designed for the people rather than any personal gain or wealth, a selfless act for which we all owe a huge debt of gratitude.

“One of the things I now admire the most about Sir Tim is not just how honest he has been about some of the problems the web has caused in recent years, but how he put himself centre stage in the effort to fix them,” said Khan.

Meanwhile, much of the web’s future appears to be mostly out of the hands of Berners-Lee – it is ultimately down to a handful of large and powerful technology platforms as to whether they want to create spaces for civil discourse free of hate speech and trolling. It is up to these same companies whether they want to design a web that values safe user interaction over clickbait or monetising user data.

But the 30th anniversary of the birth of the web has not just been about celebrating the genius of Berners-Lee, but rather celebrating his spirit of generosity that has gifted us a technology upon which we have built our modern digital culture. And that is why, although the Contract for the Web may seem overly ambitious and lacking in finer details, I think it is, well, vague but exciting.

One final thought: does he have any regrets about giving this technology away for free, especially in the face of the tech millionaires and billionaires who have built upon his groundwork?

“Absolutely not. It wouldn’t exist today if people had to pay for it,” says Berners-Lee. A few beats later he realises he does have one regret: “I could have left out the slash slash before the www – so much more typing – but it was a good idea at the time.”