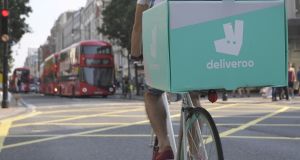 The big platforms have lowered their fees in some instances to attract restaurants at a time when the hospitality industry has been left with little choice but to go online. Photograph: Toby Melville/Reuters

“I thought what we did was get you in and serve you to the best of our abilities,” he said. “Delivery felt like the opposite of that.”

But as lockdowns have dragged on, Dishoom has done a volte-face. The company has opened six delivery-only “dark” kitchens in London and another in Brighton. It has also hired 50 new chefs to service takeaway demand. “I’m beginning to think . . . we do have a business here,” Mr Thakrar says.

The pandemic has exacted a heavy toll on the UK’s 24,400 restaurants, which have either been forced to close or operate under strict restrictions for most of the year.

Sales across the sector were 30 per cent down on last year’s before the second lockdown came into force on November 5th, according to research firm CGA. Since then, only those offering takeaway services have been able to trade.

Thousands of operators across the sector have signed up with one or several of the three dominant delivery platforms – Deliveroo, Uber Eats and Just Eat – in order to salvage demand. But not all have done so enthusiastically, with growing complaints that high commissions taken by the apps make it difficult to make money from delivery alone.

Since the first lockdown in March, surging use of delivery apps has been sustained. Deliveroo said that since the second set of national restrictions came in at the start of the month more than 1,400 new restaurants had signed up.

It has been a similar story in Ireland. In August, Deliveroo said it had signed up 600 restaurants since January, to bring the total to more than 1,800.

Uber Eats reported a 150 per cent jump in UK deliveries year-on-year in the three months to September. The group’s service now covers 75 per cent of the UK population, up from 50 per cent at the start of the year. Just Eat, the UK market leader by order volumes, said it processed 17 million transactions in October, up from 10 million in January 2019.

“For restaurants, there is no longer a question mark over food delivery the way there was at the beginning of the year,” said Toussaint Wattinne, general manager of Uber Eats UK.

While the first lockdown brought widespread disruption to food-delivery apps when some of their biggest restaurants went offline altogether, many food businesses went into the second lockdown much better prepared.

Andy Hornby, chief executive of the Restaurant Group, which owns the Wagamama chain, said that delivery sales had doubled under lockdown and he expected them to be more than a third of Wagamama’s revenues next year, up from about 25 per cent over the summer.

But commission rates for Deliveroo and Uber Eats are typically about 30 per cent, depending on the kind of order or certain discounts that have been offered to restaurants this year. (Just Eat charges a lower commission at roughly 14 per cent because most restaurants deliver orders themselves instead of using the larger fleet of couriers that Uber and Deliveroo provide.)

That means for many smaller cash-strapped businesses, delivery apps extract a heavy toll.

“If you think you are going to make money with Deliveroo or Uber Eats it is not going to happen,” said Felipe Preece, whose initiative Under One Kitchen helps restaurant owners to make food for several different brands out of their kitchens in order to reduce costs.

Instead, as customers become used to ordering meals online, restaurateurs have begun to seek alternatives that charge less or offer more tailored services – or create their own.

“There is massive disruption coming to the Ubers and Deliveroos of the world,” said Salima Vellani, founder of Kbox Global, which runs several online-only restaurant brands targeting delivery apps from inside hotels, pubs and other underutilised kitchens. “There are so many [new] players coming into that space right now.”

One is Supper, which caters to high-end London establishments such as the Harrods dining hall and Nobu. Its revenues have increased to some £15 million (€16.7 million) this year, up 700 per cent on pre-Covid levels.

Another is Slerp, which connects restaurants to couriers at a commission rate of 7.5 per cent. Slerp’s founder JP Then started the service in 2016 to manage online orders at his London-based mini-chain Crosstown Doughnuts. After opening it to other restaurants a year ago, Slerp has signed up more than 500 locations, including high-street sushi chain Itsu and the Savoy hotel restaurant.

But Crosstown – like many other Slerp restaurants – also remains on Deliveroo. Mr Then regards Slerp as “complementary”, allowing restaurants to take back control and develop a direct relationship with customers. “It didn’t really make sense as an operator to put all our eggs in one basket,” he said.

Other restaurateurs are shunning shared platforms and striking out alone.

Harry Niazi, owner of Olley’s, a fish restaurant in south London, said that he was still using Deliveroo and Uber Eats for now but recently set up his own app and is “poaching” drivers from the big companies as they come to pick up food.

Olley’s will pay drivers a £5 flat fee to serve a two-mile radius, he said, arguing that this would enable him to drop menu prices that he had increased to cover the delivery aggregators’ rates.

Restaurateurs’ complaints are not confined to fees. Despite assurances from Deliveroo and Uber that they work closely with restaurants to ensure just-in-time pick-ups and careful delivery, some still find couriers who slide pizza boxes sideways under their arms or eat customer orders.

Charlie Mellor, owner of the Laughing Heart in Hackney, co-founded the London-based delivery service Big Night during the first lockdown after receiving so many complaints that he feared customers would not want to return to his restaurant. The Big Night app has surpassed its £100,000 crowdfunding target by 273 per cent and is onboarding restaurants as fast as its eight-strong team allows.

Despite their rapid growth, few suggest these niche start-ups will challenge the big delivery apps, which have become one-stop shops for virtually any kind of takeaway food as well as groceries.

The big platforms have lowered their fees in some instances to attract restaurants at a time when the hospitality industry has been left with little choice but to go online. During the second lockdown, Uber and Deliveroo both waived restaurant fees if customers picked up the food themselves.

“The fees that we charge are absolutely essential for us to be able to operate in a safe and reliable way,” said Uber’s Mr Wattinne, “and to enable restaurants and kitchens to keep hiring across the UK.”

Deliveroo says it offers extra support to independent restaurants, such as promoting them more prominently within its app and lowering sign-up fees. Some restaurants are also able to negotiate lower commissions, for instance if they agree to list exclusively on Deliveroo, or if the app maker expects them to attract a large number of new customers or orders.

Mr Thakrar said he would continue working with Deliveroo as long as it made people want to visit his restaurants. “If your memory of Dishoom is a bad one, we should stop.” – Copyright The Financial Times Limited 2020