Bots on the march in takeover of Twitter links 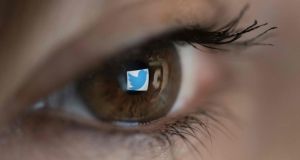 The suspected bots weren’t overtly biased, sharing about 41 per cent of links to political sites with a conservative audience, and 44 per cent to primarily liberal audiences. Photograph: Christophe Simon/AFP/Getty Images

Automated accounts – “bots” – on Twitter are responsible for spreading two-thirds of tweeted links to digital content, the Pew Research Centre has found.

The centre looked at 1.2 million tweets over a 47-day period that contained links to more than 2,300 websites covering topics from sport, celebrities, news, commercial information and organisations’ websites.

Pew Research Centre used Botometer, a tool developed by researchers at the University of Southern California and Indiana University, to determine if links had been posted through automated accounts.

It found 66 per cent of tweeted links to news and current events websites had been shared by automated accounts, with some variations for the different types of sites. Aggregation sites, which contain stories from different websites, have an 89 per cent rate. Adult websites and sports also have a higher rate of bot activity, at 90 per cent of tweeted links and 76 per cent respectively coming through automated accounts.

“These findings illustrate the extent to which bots play a prominent and pervasive role in the social media environment,” says associate director of research Aaron Smith. “Automated accounts are far from a niche phenomenon: they share a significant portion of tweeted links to even the most prominent and mainstream publications and online outlets.

The 500 most active bot accounts discovered during the analysis were responsible for 22 per cent of tweeted links to these sites, compared with 6 per cent for the top 500 human users.

But the suspected bots weren’t overtly biased, sharing about 41 per cent of links to political sites with a conservative audience, and 44 per cent to primarily liberal audiences, a difference that researchers said was not statistically significant. Bots also shared between 57 per cent and 66 per cent of links from news and current events sites whose audience is ideologically mixed or centrist.

“What we can’t say from this study is whether the content shared by automated accounts is truthful information or not, or the extent to which users interact with content shared by suspected bots,” says computational social scientist Stefan Wojcik.