Boss of Intercom apologises to employees for distractions 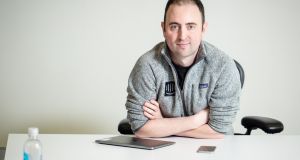 Intercom chief executive Eoghan McCabe: “In the early years of the company I demonstrated some poor judgment.” Photograph: Martin Lacey

Intercom chief executive Eoghan McCabe addressed staff on Friday evening, again apologising for poor judgment he said he had demonstrated in the early years of the company.

The Irish Times understands he spoke to staff in Dublin after allegations of harassment were reported on technology news website “the Information”. He is understood to have apologised for people having to make time to be at the meeting, and the distractions it caused from the business of the company.

It is understood that co-founder Des Traynor, chief operating officer Karen Peacock and vice-president of people Chris Tobin spoke at the meeting. Mr Tobin explained that a new review was ongoing and that support processes were open to anybody who needed them.

Mr Traynor and Ms Peacock voiced their support for the chief executive.

The issues arose after “the Information” alleged that Mr McCabe made unwanted advances towards female staff between 2014 and 2015. It claimed that he inappropriately touched a woman and propositioned a junior employee after a work party. The Irish Times has not verified these claims.

It is understood that Mr McCabe strongly contests the version of events outlined in the article.

While he has not commented on the nature of the allegations, in a statement, he said: “In the early years of the company I demonstrated some poor judgment. I apologised at the time and have matured as a person and a CEO since then.

“I’m proud of the respectful culture we’ve built, and have long believed that people do their best work when they feel truly happy and safe. I fully support the independent review into these matters and our HR practices.”

At the time of the allegations there was an internal investigation followed by an external review by a human resources (HR) consultant. Now, an additional external review has been commissioned by the company’s board.

“Recently, questions regarding the handling of some matters that were previously investigated by HR and reviewed by the board have been raised. We have engaged an expert to conduct a new investigation and review into these matters as well as our HR policies and will follow any recommendations that come from it,” the board said in a statement.

Founded in 2011, Intercom employs more than 600 staff and produces a messaging platform to allow businesses communicate with customers on their website, app or through social media.

Having raised a total of $240.8 million the company has a valuation of $1.275 billion. It is believed that the founders hold a significant shareholding which would include Mr McCabe’s shareholding of about 12.5 per cent.