Inside Twitter: How the company deals with difficult conversations 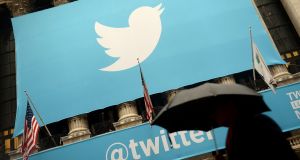 Working for a social media company these days may seem like an exercise in endurance. Once considered a way of connecting the world, it has morphed into a way of spreading disinformation and fake news, of weaponising information in a bid to influence political events in other countries and, above all, of making money from the personal data of its users.

And yet, we can’t seem to stay away from it.

As social media becomes increasingly important in the political sphere, the spotlight has been turned on its practices and those of the people working within it.

But Jennifer Christie, Twitter’s chief human resources officer, said most people who come to work with the company just want to have an impact – a positive one – on the public conversation.

We’re very democratic organisation, I would say, so not a lot of top down-like directives

Christie came to Twitter from a more corporate background; she worked with American Express for eight years before leaving the 168-year-old company and New York behind to move across the country and join Twitter.

“What intrigued me so much was the opportunity to have an impact at a company like Twitter and the people that I was talking to who were so energised and excited,” she says. “That actually was just the best kind of recipe – being able to go some place like Twitter, work with those folks and be able to have an impact in a very different way; taking everything I learned before, but being able to apply it to Twitter, which was at that time was 12 years old and at a much different place in its history.”

The almost-teenage company needed to figure out “what kind of adult they wanted to be”, Christie said, a journey that appealed to her.

That was in 2017. Fast forward a couple of years and Twitter seems to still be trying to figure out its final form. The company has its problems, battling accusations of facilitating hate speech and the rise of the alt-right, trying to stem abuse of its platform, while also keeping a close eye on bot accounts that could be use to try to influence local politics and stamp out the fake accounts that spring up regularly.

It is not alone in this – Facebook has come under fire for similar allegations – but it is something that isn’t far from the public conversations. Twitter ran the same advertisement for US president Donald Trump’s campaign that is drawing intense criticism for Facebook over the ad’s inclusion of false information, and the social media platform hasn’t made any clear declaration on its position about politicians lying in their ads.

Twitter is also the social network of choice for Trump, leaving it with another dilemma: should it suspend the president’s account, even if he violates the company’s own terms of service? Twitter has said repeatedly that politicians like Trump deserve a different standard because what they tweet is inherently newsworthy – something that leaves it at odds with campaigners.

The company has also found itself under fire from US politicians and accusations of political bias, with chief executive Jack Dorsey questioned by US congress last year on bias, and the company’s process for suspending and banning users from the service. He told the committee that “impartiality” was Twitter’s guiding principle.  Dorsey later announced that Twitter  will ban political advertising from its platform, from  November 22nd. It plans to publish a new political ads policy.

Its policy of impartiality  could cause some discord among staff who may not necessarily agree with the company’s methods of tackling abuse on its platform. But Christie has a more upbeat view of things.

That could cause some discord among staff who may not necessarily agree with the company’s methods of tackling abuse on its platform. But Christie has a more upbeat view of things.

“Something that almost to a person who I’ve interviewed to come to Twitter or talked to who’s at Twitter, is they are very much bound by our purpose, serving the public conversation and trying to have it be a positive force in the world,” said Christie.

“And so even folks who come in who have a lot of questions about what we are doing about this on the platform, or are we committed – they dive deep into that kind of stuff and get their questions answered. They come on board and want to be part of that. It’s not they want to be part of what we need to fix; they want to help fix it, but they ultimately have that goal of being part of this broader conversation and that kind of internet, the conversation layer of the internet, so to speak. So they think that’s like a higher calling.”

She refers to these people as “curious” and “problem solvers”. Key to attracting people like that, Christie says, is Twitter’s culture.

“We’re very democratic organisation, I would say, so not a lot of top down-like directives,” she says. “People can work on really interesting projects and kind of create their own roles and spaces. Even if they have some questions about it, they still want to be part of it.”

Framing Twitter as being part of a conversation inevitably leads to a discussion on hate speech versus free speech. That’s where things get murky. With free speech comes the potential for workplace clashes. While tech seems to lean left a lot of the time in political dealings, there are inevitably going to be differing viewpoints.

“It’s a unique challenge for running the ‘people team’ in a company like Twitter, because there’s such a convergence between our employees and our customers. I can’t imagine that there’s an employee that we have that hasn’t been on Twitter, isn’t on Twitter; with various other companies, you might have some customer overlay. And as a result, we have to operate almost like there’s no walls, you almost have to operate in the company like you operate on the platform: you have to be open, you have to be transparent,” says Christie.

“A go-to for a lot of companies is signing social media policies, like you’re going to say these things and when difficult conversations come up, like if there’s polarising topics, you say, we don’t talk about that in the workplace.

“We’re going to just keep focused on working. We’re not not having these debates in the workplace. And we’re almost the polar opposite of that.

“We can’t sit here and say we’re going to serve the public conversation and we want all voices we want, and then have echo chambers inside.”

Google ran into its own issues in 2017 when engineer James Damore posted a 10-page memo to an internal company message board questioning Google’s approach to diversity and arguing men may be more suited to working in tech than women. Damore was fired from the company, and the subsequent uproar had people on both sides of the debate arguing furiously.

“We really tried very hard to make sure that whatever topic it is that it is not one-sided and people feel like they can have their voice heard and express a different opinion and get a conversation going about anything like that,” says Christie.

It is a thin line that social media companies may find difficult to walk. In recent weeks, Facebook chief executive Mark Zuckerberg gave an address at Georgetown University that explained Facebook’s approach to content on its platform, favouring the US ideal of free speech. But speaking at the Twitter News Summit in New York, Dorsey publicly called out Zuckerberg, saying there was a “major gap and flaw” in his argument.

Where Twitter goes to from here is an open question. Late last month Twitter reported third-quarter results that came in well below expectations and gave an outlook that was seen as weak. The company saw its stock fall, erasing as much as $4.5 billion in value from the company.

Part of the issue is revenue growth; the more pressing issue for the company though for the company has been in its ability to grow its user base. That is something that has dogged Twitter for some time. While Facebook has breached the 1.5 billion daily active user mark, Twitter has struggled to reach those heights. The latest set of figures showed more encouraging growth in this area, with the company adding 6 million new daily active users to 145 million in the third quarter, a 17 per cent increase from a year earlier and a 4 per cent gain from the previous quarter.

“Despite its challenges, this quarter validates our strategy of investing to drive long-term growth,” Segal said in a statement. “More work remains to deliver improved revenue products. We’ll continue to prioritise our ad products along with health and our investments to drive ongoing growth.”

Twitter will also face pressure on its advertising figures due to privacy issues; the company had previously been collecting device information from people it wasn’t supposed to and using it for targeting advertising, and also shared data with advertisers it wasn’t supposed to for measurement purposes. Removing that data has hit its figures. Third-quarter sales increased to $823.7 million, below the $876 million analysts estimated.

On the inside, the work continues.

“I think something that helps the morale of our folks is that we do try to make an effort to point out the good things that are happening,” Christie says, pointing to the recent floods in Houston where Twitter was used to get people’s locations to send help.

“I don’t think we spend as much time talking about that externally. Because we just aren’t a company that runs around and does that but it is important for our folks internally to hear that and balance, you know, so they understand. People don’t talk about it as much as it doesn’t generate as much news. But it’s good for them to hear that too.”