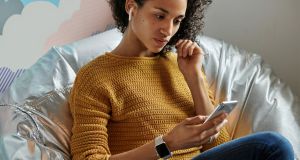 Apple has unveiled the second generation of its wireless headphones, with a new chip that offers improved performance and better battery life.

The new H1 chip, which was developed specifically for headphones, offers an extra hour of talk time and faster connections. It also allows users to access Apple’s digital assistant Siri through the “Hey Siri” command.

The new AirPods will also switch between devices – such as the iPhone, iPad and Apple Watch – easier and more quickly.

“AirPods delivered a magical wireless experience and have become one of the most beloved products we’ve ever made. They connect easily with all of your devices, and provide crystal clear sound and intuitive, innovative control of your music and audio,” said Phil Schiller, Apple’s senior vice president of Worldwide Marketing. “They are powered by the new Apple-designed H1 chip which brings an extra hour of talk time, faster connections, hands-free ‘Hey Siri’ and the convenience of a new wireless battery case.”

1 How to gift your child a house deposit . . . tax free
2 BOI customers to be charged twice with bank fees on New Year’s Eve
3 Son putting elderly dad under pressure to sign over land
4 Workers have little idea of the cost of retirement income
5 Digital bank N26 targets one million customers in the Republic
Real news has value SUBSCRIBE