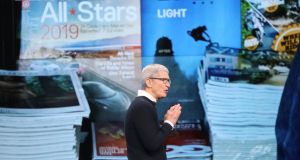 Apple unveiled new services at a star-studded event in California, including its long-awaited TV service, a new subscription news service and an Apple credit card.

The press event, held at Apple Park in Cupertino, marks a departure from the iPhone maker’s long-standing practice of using such keynotes to unveil new hardware and software.

“Today’s going to be a very different kind of event,” Tim Cook, Apple chief executive, said as he opened the event, adding that “today is all about” services.

Steven Spielberg, Jennifer Aniston, Reese Witherspoon and Jason Momoa were just some of the celebrities who took to the stage to outline their involvement in the new TV service, Apple TV+, which includes original programming from Apple.

Apple also announced it would update its TV app in May, bringing access to services such as Showtime, HBO and Starz, along with suggestions from services such as Hulu and Amazon Prime.The app will also come to smart TVs later this year.

The magazine subscription service, Apple News+, will give subscribers access to more than 300 magazines, charging $9.99 (€8.83) a month. Available in the US and Canada initially, Apple said it would launch in Europe later this year, starting with the UK.

Mr Cook said the service will “take news to a whole new level”.

The Wall Street Journal, magazine publisher Condé Nast and the LA Times will also be featured in the app. But despite bringing together some 300 titles for Apple News+, other big publishers such as The New York Times and The Washington Post were absent when the expanded app for iPhones and iPads was unveiled on Monday.

The platform is launching almost four years after Apple’s last attempt to create a digital platform for newspapers and magazines, NewsStand, was shuttered. Last year, Apple acquired Texture, a digital magazine aggregator that was backed by publishers including Condé Nast and Hearst, who have now signed on to its successor.

Some publishers have balked at the terms Apple requested for inclusion in Apple News+, believed to be about half of the revenues generated by subscriptions.

Apple has teamed up with Goldman Sachs to launch the Apple Card credit card, which is designed for iPhones. The card will work where Apple pay is accepted, offering users cash back for making purchases on the card, and with a titanium physical card for places where Apple Pay isn’t available. Updates to the Wallet app will allow users to keep track of their spending, and the new card ditches charges for late payments and foreign currency purchases.

Mr Cook claimed that the payment card would be the biggest innovation in credit cards “in 50 years”, and was being built on the company’s five-year history in the payments industry. “With the success and momentum of Apple Pay, we’ve learned a lot about credit cards,” he said.

The card, issued on the Mastercard network, gives users 2 per cent cash back, with no annual charges or late fees. The company did not say what interest rate would be charged at launch, but Jennifer Bailey, vice-president of Apple Pay, said: “Our goal is to provide each customer with the lowest rate in the industry.”

Apple executives played up simplicity, privacy and security as features that they claimed would set Apple Card apart. Each credit card number is stored on an Apple device’s security chip, and a new code is created for each transaction. Apple said it would not see any data itself about a user’s transactions, and that Goldman would not sell any customer data for advertising or marketing purposes.

The new physical card will carry only Apple’s logo and the user’s name, on a plain white background. All other information, like the card number and expiration data, are held in the card’s chip. Apple said the card would be released in the US “this summer”, but did not say whether it had plans to roll it out more widely.

The company also launched a new games subscription service, Apple Arcade, which brings its games to mobile devices, desktop computers and Apple TV. Apple pledged to keep the service ad-free, and said parents would be able to control screen time for children.

“The App Store is the world’s biggest and most successful game platform. Now we are going to take games even further with Apple Arcade, the first game subscription service for mobile, desktop and the living room,” said Phil Schiller, Apple’s senior vice president of Worldwide Marketing. “We are working with some of the most innovative game developers in the world to create over 100 new and exclusive games to play across iPhone, iPad, Mac and Apple TV.”

The service is due to launch in the autumn in 150 countries.

The move to services comes as sales of Apple’s hardware, such as the iPhone, slow, with customers holding on to their existing phones for longer or looking at rivals offering competitive features.

And back to TV

Apple broke with its past attempts to break into the video business by announcing partnerships that will take its Apple TV service beyond its own devices. The move echoes the launch of the iTunes music store for Windows-based PCs more than 15 years ago, and will see Apple ally with arch rivals such as Samsung and Amazon in a bid to get wider reach for a key part of its push into digital services.

The expanded Apple TV app – which will include both Apple’s original television shows from directors such as JJ Abrams, Steven Spielberg and Ron Howard, as well as the ability to subscribe to third-party services such as HBO – will be available on smart TVs from Samsung “this Spring”, Apple said, with Sony, LG and Vizio TV sets to follow. It also said the service would be distributed through Roku and Amazon’s FireTV.

Although the new Apple-produced content will for the first time include original programming from the likes of Mr Spielberg and Mr Abrams, known for the TV series Lost and reboots of the Star Trek and Star Wars movie sagas, the launch also marked the latest of several faltering attempts to break into the video business. – Additional reporting: Copyright The Financial Times Limited 2019