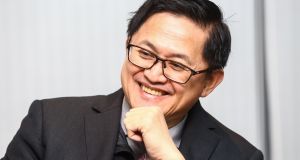 Tung Tzu-hsein, chairman of Pegatron: Company has moved to Indonesia some manufacturing of products hit by US tariffs on Chinese imports. Photograph: Maurice Tsai/Bloomberg

The two largest contract manufacturers of Apple’s iPhone are expanding production capacity outside China, as the global trade war and a slowing Chinese economy weigh on the sector’s earnings.

Foxconn, the Taiwanese group that assembles iPhones and makes everything from smartphones to industrial robots for a range of multinational and Chinese brands, said in filings to the Taiwan Stock Exchange on Saturday it had invested up to $213.5 million (€187 million) into a subsidiary in India since September and acquired land use rights in Vietnam.

Pegatron, another Taipei-headquartered group, which accounts for about 30 per cent of Apple’s assembly orders, said on Sunday it was planning to build production capacity in Indonesia, Vietnam and India.

SJ Liao, Pegatron president, said the company would announce a concrete plan for Vietnam soon, but added Pegatron’s pace of expansion outside China might depend on further developments in the US-China trade war.

The two companies’ moves are part of attempts throughout the supply chain to diversify beyond China, the hub of global technology manufacturing for the last 20 years.

Some multinational technology gadget brands are suffering as US tariffs under its trade war with China on certain components eat into their profit margins, creating pressure to relocate production away from China. In addition, the downturn in the Chinese economy, is driving electronics companies to focus on other large markets.

Apple, due to report quarterly results on Tuesday, shocked investors on January 3rd with a warning that the weak Chinese economy and slower uptake of new iPhone models in developed countries could shave up to 10 per cent off revenues for the December quarter compared with the company’s earlier expectations.