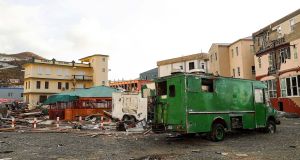 Digicel, the mobile phone company owned by Denis O’Brien, deployed a team of 700 workers in recent days to get services back up and running in its hurricane-ravaged Caribbean islands heartland, according to a senior executive.

Vanessa Slowey, the company’s regional chief executive for the Caribbean and Central America, said the team was deployed from Friday across the island markets worst hit by Hurricane Irma.

Haiti, which is one of the most lucrative parts of Digicel’s network, was among the areas affected. Smaller island communities in its network, such as St Kitts and Nevis, Anguilla, and Turks and Caicos were also badly affected as the hurricane knocked out services and damaged the company’s cell infrastructure.

Ms Slowey, a sister of Gervaise Slowey who formerly ran Communicorp for Mr O’Brien, told CNBC that the damage caused by Irma was “unprecedented” in Digicel’s markets.

Fears that Hurricane Jose, which is currently in the region in the wake of Irma, would wreak similar havoc have so far not come to pass. Jose has only brushed the islands worst affected by Irma and has decreased in power.

Ms Slowey said that as well as sending out teams to repair its telecommunications infrastructure, Digicel is also engaged in frantic relief efforts among the island communities worst hit.

On Sunday, Digicel filled a 64m-long barge with relief supplies in Trinidad, including network equipment, first aid kits and food. The barge has set sail for the hardest-hit islands of the British Virgin Islands and Anguilla, and is expected to arrive in the coming days.

During Hurricane Irma, the company provided free mobile phone minutes to its customers to communicate with other Digicel subscribers. On the islands of Anguilla, Antigua and Barbuda, BVI, Dominica, Montserrat, St Kitts and Nevis and the Turks and Caicos Islands, customers received $10 of fee credit over the 48 hours at the height of the storm.

In Haiti, customers got 10 minutes free call-time and 50 free texts. Before Irma hit last week, Digicel was also enlisted by the Haitian government to send out up to seven million texts to its customers, warning them of the storm’s impending arrival and that they should evacuate.

Maarten Boute, who chairs Digicel Haiti, told local journalists, however, that Haitians tend to ignore the warnings because they are “blasted with them” too often.

In addition to Digicel, Mr O’Brien also has other interests in the hurricane-hit Caribbean region, including undersea cable company, Deep Blue Cable, which is preparing a fibre rollout. Members of Deep Blue’s senior management team were in Dublin before the weekend to meet with representatives of Mr O’Brien, although it is understood these meetings were scheduled before the storms and were not directly related to its impact.

Digicel operates in 27 markets in the Caribbean and central America.