Apple pledges to invest more than $30bn in US 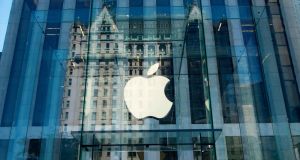 Apple said the investments would help it make a $350 billion “direct contribution” to the US economy over the next five years. Photograph: Getty

Apple has pledged to invest more than $30 billion to expand its US operations in the wake of last month’s US tax cut, even as it makes an estimated $38 billion (€31 billion) one-off tax payment on the repatriation of its overseas profits.

The iPhone manufacturer said the investments – including a brand-new US campus, data centres and more than 20,000 new jobs – would help it make a $350 billion “direct contribution” to the US economy over the next five years.

Much of that contribution stems from its previously-planned spending with domestic suppliers, which it estimated would hit $55 billion in 2018, up from $50 billion last year.

The commitment to domestic investment is the largest yet by a US company since US president Donald Trump signed the tax overhaul into law. Mr Trump has often criticised Apple and other large tech companies for their reliance on overseas manufacturing.

Apple’s estimated $38 billion one-off tax payment “would likely be the largest of its kind ever made”, the company said on Wednesday.

The company’s plan for another new campus comes just months after it opened Apple Park, its spaceship-shaped new headquarters in Cupertino. The new facilities, the location for which has not yet been announced, will be focused on technical support and will help create more than 20,000 new US jobs over the next five years.

“Apple is a success story that could only have happened in America, and we are proud to build on our long history of support for the US economy,” said Tim Cook, Apple’s chief executive. “We believe deeply in the power of American ingenuity, and we are focusing our investments in areas where we can have a direct impact on job creation and job preparedness. ”