Apple and Samsung TV partnership has been years in the making 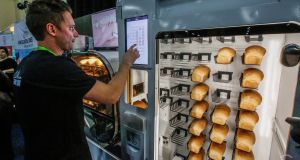 News that Samsung is teaming up with Apple to bring the iTunes movies and TV shows app to the South Korean company’s smart TVs certainly came as a surprise.

Later this year, Samsung smart TVs will not only get access to iTunes content but will also be opened up to Apple’s wireless AirPlay 2 connection, which means iPhone and iPad users will be able to stream content directly to their TVs.

Samsung and Apple are, in public at least, bitter rivals. The companies have gone head to head in the smartphone market, each battling to be the most innovative, the most sought after. Ditto in the tablet market where the iPad has done battle with Samsung challengers.

They have also locked horns in the courts, with an apparently endless round of patent cases, each accusing the other of infringements. Seven years and several million dollars in awards later, the companies finally called a ceasefire on hostilities last June.

It’s still full steam ahead, with the autonomous car exhibition space at CES now more than 30,000sq ft, but pragmatism is starting to creep in

But behind the scenes, the two have had a business relationship stretching back a decade. It might come as a surprise to some to learn that the iPhone X’s OLED display, a source of significant praise, was actually provided by Samsung. Over the years, Samsung and its subsidiaries have provided a number of hardware components for Apple; which may not always be the case as Apple continues to develop its own technologies.

The partnership on television content, however, is a new departure, but it’s one that seems logical. Samsung already sells a lot of TVs around the world while Apple has a platform with content it wants to push to a wider audience.

But what does it mean for Apple’s rumoured ambitions in the TV market? It might be something, it might be nothing. Before the iPhone, there was the Rokr, a 2005 joint venture with Motorola that brought iTunes to mobile phones. Two years later, Apple released the iPhone, and the rest, as they say, is history.

The current partnership with Samsung doesn’t stop Apple from releasing any other TV products – if that is the road the company is intending to go down. But, although there have been plenty of rumours, there is nothing concrete to say that Apple will release a TV of its own.

And even if it does, it doesn’t mean these partnerships will fall by the wayside. More recently, Apple also signed a deal with Amazon that enabled the Apple Music streaming service to be added to the Alexa-enabled range of smart speakers – despite Apple’s own HomePod providing a measure of competition for the Echo devices.

Microsoft has adopted a similar strategy, developing apps and software for systems other than Windows or Microsoft hardware in a bid to get more people using its products. Apple is putting new focus on the services side of its business at a time when the markets for its hardware – iPhones in particular – have shown signs of saturation.

But televisions aren’t the only thing that Apple has been rumoured to be involved in. Autonomous cars, a staple of the annual gadget-fest, the Consumer Electronic Show, or CES, for the past few years, are also said to be a target, although that market is likely a slow burner. The technology may be there, but merging it with the real world is presenting ethical issues that may take some time to resolve.

It’s still full steam ahead, with the autonomous car exhibition space at CES now more than 30,000sq ft, but pragmatism is starting to creep in.

And if you need any evidence of how expectations have been tempered, look no further than Daimler/Mercedes-Benz. In 2015, it went big at CES with the F 015 concept car; last January, its big hardware splash was shutting down the Las Vegas strip for a demo of what looked like an oversized remote control car that topped out at about 12 miles an hour. The company also unveiled its new AI “infotainment” system, MBUX, which came with its own digital assistant, and was arguably far more realistic a prospect.

This year, Daimler is back but with a more utilitarian slant – a bubble-like autonomous shuttle designed to reliably ferry people and goods around town at limited speeds. Driverless cars on our roads might be some way off but shuttle services in confined areas are starting to look more feasible.

But CES isn’t really about realism. It’s a showcase of potential and ambition, designed to tell us what we should want and how companies are planning to give it to us.

Yes, some of the products may make their way to the shop floor and some may already be on sale. Others may take years to get there, if at all. Many will never make it – a combination of wrong time, wrong audience, wrong idea. Window cleaning robots? I can see the use for that. Mirrors that show you your body composition? Thanks for that, Intel, but we’ll pass. The smart toilet that tracks your trips? I’m not even a little bit curious.

This year will be no different. The 2019 show is just getting underway and is bound to provide plenty of tech and topics for discussion. From 5G and robots to 8K TVs and smart healthcare products, there is plenty of useful, worthwhile technology in there among the crazier ideas.

The march of AI automation into our daily lives is continuing, and nowhere is that more visible than CES. It’s up to us to decide exactly how far we want that to go – at least for the things we can control. CES will provide a brief window into the future, and it’s certainly worth taking a little peek.