Google Ireland pays €1.6bn dividend to US parent and €171m in tax 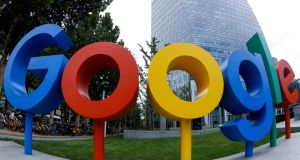 Google Ireland announced a €5.9 billion rise in turnover to €32.2 billion.

Google Ireland paid out a €1.6 billion dividend last year as it announced a €5.9 billion rise in turnover to €32.2 billion on the back of a sharp rise in advertising revenue.

Newly-filed accounts for the internet giant, which employs more than 3,400 people in the Republic, show its tax charge for the year rose to €170.9 million from €163.8 million last year.

That’s equivalent to 12.9 per cent of its pretax profit for the year, which was €1.33 billion, compared with €1.34 billion a year earlier. The decline was due in part to a rise in the cost of sales, which rose by €2.1 billion to €9 billion.

Administrative expenses also increased over the year, rising by €3.5 billion to €21.9 billion due to a number of factors including a 7 per cent increase in direct employees to 3,428 from 3,201 in 2016.

Google said the 22.4 per cent in turnover it recorded was largely due to a rise in advertising revenue, generated by an increase in the number of paid clicks made.

Google, which is celebrating 15 years in Ireland, recently announced that 2018 has been its most successful hiring year with the company now supporting 8,000 jobs in Ireland.

Fionnuala Meehan, vice-president and head of Google Ireland described 2017 as “a year of continued growth with global demand for our advertising products and services continuing to increase.”

The company’s total assets decreased to €7.8 billion last year from €8.5 billion due to rises in debtors. Shareholders’ funds meanwhile declined by 10 per cent from €4.9 billion to €4.4 billion primarily as a result of the €1.6 billion dividend it paid out to its parent.

Google has increasingly had to deal with regulators unhappy with both the power it wields as one of the world’s biggest companies, and its tax-avoidance strategy, which has allowed it to shield the majority of its international profits from taxation.

More recently, it has also been forced to shut down its Google+ platform after belatedly admitting to discovering a bug that allowed third-party app developers to access personal users’ information.

As if that wasn’t enough, an estimated 20,000 staff members in offices from Silicon Valley to Dublin to Singapore staged a walkout earlier this month after it was reported that the company had protected a number of senior executives, including Android creator Andy Rubin, accused of sexual misconduct.

None of this has stopped the company’s phenomenal growth, however. Google’s parent Alphabet recorded revenue of $110.9 billion in 2017 with turnover from the third quarter of this year alone amounting to $33.74 billion.

Locally, the company has reportedly been seeking to increase its footprint in the Dublin Docklands area once again with plans to acquire sole control of South Bank House and the Warehouse, both of which are beside the Google Ireland headquarters on Barrow Street.