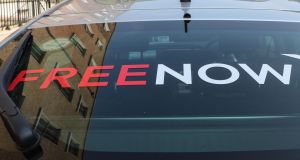 Free Now, which is owned by German carmakers Daimler and BMW, told its drivers on Tuesday that they should by now have received two payments in their bank accounts. Photograph: Crispin Rodwell

Free Now, the taxi app with up to 14,000 drivers in Ireland, says it has paid all drivers the money it owes them, after two weeks of delays that had sparked concern within the trade.

Free Now, owned by German carmakers Daimler and BMW, told its drivers on Tuesday that they should by now have received two payments in their bank accounts: one that was due last week but was repeatedly delayed, as well as this week’s payment.

Payments from Free Now passengers who pay for their journey by card through the app are normally forwarded by the company on to drivers once a week, but the company had missed four such deadlines over the past fortnight.

Free Now apologised to drivers for the delays and blamed its third-party payments processor, Wirecard, which is part of a German group that entered insolvency this summer with a €1.9 billion hole in its balance sheet.

The app has since switched to Commerzbank to handle payments to drivers.

Cormac Devlin, a Fianna Fáil TD for Dún Laoghaire, on Monday wrote to Eamon Ryan, the Minister for Transport, asking him to order taxi industry regulators to investigate the repeated payment delays, which left thousands of taxi drivers who rely on the app without the bulk of their weekly earnings.

Mr Devlin suggested in his letter to the Government that legislation may be required to compel third-party aggregator apps to be bonded, or to hold back cash in reserve to cover payments that they collect for others.

1 ‘I don’t need to do any of this. . .I don’t actually need to work.’
2 Direct sea routes to Europe offer certainty in choppy Brexit waters
3 Promontoria barred from pursuing doctor over Ulster Bank loan
4 Admission of mistake in Oxford vaccine dose raises doubts over reliability
5 Only way is up for Stripe as valuation skyrockets
Real news has value SUBSCRIBE