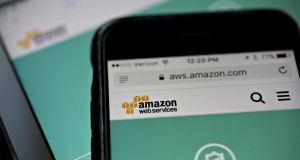 In 2018, Amazon Web Services was a $25.6 billion dollar revenue company, and its technology supports some of the biggest businesses in the world. Photograph: Andrew Harrer/Bloomberg/Getty Images

“This what I tell all my clients.” Werner Vogels is holding up a T-shirt that reads: “Encrypt everything”.

Amazon’s chief technology officer and vice-president encourages clients to protect their information, and gives them the tools to do it with through Amazon Web Services.

“We’re very strong believers that the best way to help our customers protect themselves from whatever bad actors you can imagine is to ensure encryption is as easy to use as any other digital service,” he says.

The two companies are intertwined. From one you can buy everything from washing powder and nappies to TVs and tablets; the other is the power behind it. And not only Amazon, but a growing number of companies worldwide.

In his time, 60-year-old Vogels has overseen innovations such as the introduction of Alexa and the founding of Amazon Web Services (AWS), which is the current leader in the cloud services market. The company, which is a subsidiary of Amazon, provides on-demand computing services on a pay-as-you-go basis, and has helped democratise technology that would otherwise be out of reach for many small businesses.

“AWS does have its roots in Amazon the retailer. That’s where most of our principles come from, its how our company operates,” he says. “Amazon the retailer has its motto to be the Earth’s most customer-centric company, and it’s the same thing we apply to AWS. When we started building AWS we wanted it to be the Earth’s most customer-centric IT provider. The first thing we did was not only think about the technology to build but also what is the economic model that goes with it.”

It has paid off for the 13-year-old AWS. Over the years, Amazon has seen its fortunes soar – and its public image falter, from allegations of poor treatment of workers to constant questions over its tax obligations. AWS meanwhile has gone from strength to strength. In 2018, it was a $25.6 billion dollar revenue company, and its technology supports some of the biggest businesses in the world, as well as the emerging players shedding their start-up status and those just starting out. Last year, the company announced it would recruit 1,000 employees for its Irish operations, a major investment for the business.

Things could have gone very differently for Vogels. The Dutchman originally studied radiology, working at the Netherlands Cancer Institute for six years before returning to university and studying computer science. Then came a career in computer science research, working at INESC in Porto, Portugal, and Cornell University before co-founding a company, Reliable Network Systems.

In 2004, he joined Amazon as director of systems research; a matter of months later, he was named chief technology officer, followed by vice-president of the firm. He has since added a string of accolades to his name and was once described as “cloud’s most influential executive”.

Ironically, AWS was built on failure – specifically, an event that Vogels describes as his worst day at work. On December 12th, 2004, Amazon was gearing up the last day of the Christmas rush. That particular day was the deadline for orders to qualify for the online retailer’s cheapest shipping option if customers wanted their packages to arrive before Christmas. But a bug in some code tanked Amazon’s customer database; no database meant no business, effectively shutting down the company for 12 hours.

Amazon was, for those 12 hours, dead in the water.

But it was this failure that has driven much of the development in AWS, Vogels says. “Things fail. Databases fail.”

At AWS Re: Invent 2018, the company unveiled a range of new services that would bring more technology to companies for a lower cost, from its machine-learning algorithms that power its recommendations and forecasts to new tools to help companies manage their data, improve their security and introduce blockchain services.

Vogels has seen his role change considerably over the years.

“In Amazon, when I joined, my role was really that of what you would call a big thinker – thinking about where should we go with our technology, what are the kind of things that we need to do to achieve the business goals that we have in mind, what are the unique technologies that we have developed that we may be able to build businesses out of? That’s a fairly internal, inside-focused job,” he says. “But when you become a technology provider, your role as a CTO changes, you become what I would call an external-facing technologist, someone who is interacting with customers and understanding what are still the biggest pain points – not just with our technology but in general with IT – and thinking about what are the kind of technologies we need to develop to help our customers solve their problems.”

That’s the largest part of his job right now, he says. It has been partly influenced by his own experience with vendors – guessing what the company’s needs will be in five years’ time, writing large cheques and often overspending, he says.

“When we decided to build AWS we decided if you want to be the Earth’s most customer-centric IT provider, you need to give control to your customers. There is no contractual obligation when you use AWS to stick with AWS. You want to move somewhere else? You want to do something else? You are free to go. We need to be on our toes every day to deliver the absolute best service. Otherwise customers will leave,” Vogels says.

Did Vogels suspect AWS would be as successful as it has been?

“Did we know for certain? No. But in Amazon we have this principle that if we make significant capital investment we do this in areas where we feel if we are successful, we are going to be massively successful,” he says, listing Amazon’s success stories – Kindle, Prime, AWS.

“We also did a phone.” He pauses. “That didn’t really work out that well.” But he is matter of fact: some experiments will fail. The successful ones make up for that though.

“It sounds a bit coy but we are not interested in the next 50- or 100-million dollar opportunity; we’re interested in the $1 billion opportunity, the ones that have a significant impact on our balance sheet,” he says. “What caught us maybe a little bit off guard was how fast AWS moved. It was clear that there was a real need among young businesses as well as enterprises to start getting away from the bothersome hassle they have in their IT environments.”

Alexa could provide a significant opportunity for Amazon in the future. When Amazon created Alexa, the company gave the digital assistant a bit of a personality. Talk nicely to Alexa and remember you manners, and the AI responds in kind; ask her to marry you and you’ll be politely rebuffed. Alexa will sing you a song, tell you a joke, tell you a story.

There are about 70,000 skills for Alexa. Not all of the skills being developed for Alexa are equally useful. Alexa can tell you a daily joke, for example. And of course there are the inevitable fart skills.

But among Alexa’s capabilities are skills for services such as WebMD, where you can answer a few questions on symptoms rather than fill out a web form. And one of the most recent is Apple Music, which allows owners of Amazon’s Echo speakers to use Apple’s service as the default for music. It was rolled out in the United States late last year; it was made available to users in Ireland last week.

“Voice is such a natural way of interacting. If I’m home, pulling out my phone is something I never do any more to search,” says Vogels. “Me, as a stupid European in America, I never can remember how many millilitres in a cup, and the moment you need it, you have your hands dirty – wash up, get your phone. Now it’s just: ‘Hey Alexa, how many millilitres in a cup?’ It’s just simple.”

It could also prove a gateway for people who don’t use digital systems at the moment, such as older users.

“One of the things I would like to see us accelerate is the introduction of new languages . You can’t do that by hand, like training it with people,” he says. “Are there ways in which we could ingest hundreds of tapes of a particular language and be able to understand the language and start using it? Automatic language creation would be definitely a challenge; we are looking at it.”

However, as technology becomes more intelligent and more intertwined in our lives, there are increasing concerns about the effect it is having on society and privacy. Amazon has faced questions about privacy with its Echo devices, with reports last year that Echo speakers were activating and recording conversations that their owners hadn’t intended.

But it can go further than that, with a series of digital “servants” to do our bidding, how will that affect society’s humanity?