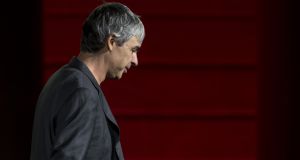 Alphabet chief executive Larry Page didn’t get board approval when he awarded a $150 million stock grant to Andy Rubin, the creator of the Android mobile software who was under investigation by the company for sexual harassment at the time, according to a lawsuit.

Mr Page later got “rubber stamp” approval for the equity compensation package from a board leadership committee eight days after he granted it in August 2014, according to a revised investor complaint made public on Monday in California state court in San Jose. Mr Rubin used the grant as “leverage” to secure a $90 million severance agreement when he left the company almost three months later, according to the complaint.

The new allegations shed light on Mr Page’s power to compensate top executives and could add fuel to criticism that the company’s board isn’t strong enough to keep management accountable to shareholders. It could also pull Mr Page deeper into the controversy around how Google has handled sexual harassment complaints. The Alphabet co-founder has generally stayed behind the scenes, while Google chief executive Sundar Pichai has been left to deal with criticism of the company’s culture.

“It’s confirmation of the fact that there were these large payouts” to Google executives and that the company’s “own internal investigation had shown there was misconduct and harassment,” Louise Renne, a lead lawyer for the plaintiffs, said Monday by phone.

“Nonetheless, rather than being just being terminated, they were terminated with hefty reimbursement and gifts,” Ms Renne said.

A lawyer for Mr Rubin said the complaint mischaracterises his departure from Google.

“Andy acknowledges having had a consensual relationship with a Google employee,” attorney Ellen Stross said in an email. “However, Andy strongly denies any misconduct, and we look forward to telling his story in court.”

The $90 million severance package was first detailed by the New York Times in October 2018, and sparked a firestorm of criticism from both inside and outside the company. Soon after, thousands of Google employees walked out to protest how the company handles sexual harassment complaints. Since then, Google has changed its policies, including ending the practice of barring employees from suing the company and shunting them into private arbitration. People fired for sexual harassment haven’t gotten severance payments in the past two years, Google has said.

“There are serious consequences for anyone who behaves inappropriately at Google,” a spokeswoman for Google said in an emailed statement. “In recent years, we’ve made many changes to our workplace and taken an increasingly hard line on inappropriate conduct by people in positions of authority.”

Alphabet initially required shareholders’ lawyers to conceal information in the complaint about the $150 million stock award to Mr Rubin, on grounds it was confidential, according to Ms Renne. Alphabet then rescinded its demand. Google declined to comment on that decision.

“My hope is this is a step toward transparency,” Ms Renne said, referring to Alphabet’s decision to not fight the information being unsealed. “The reason we brought this shareholder lawsuit was to have some transparency governing corporate affairs, as well as the behavior being completely inappropriate conduct toward women.”

One allegation unsealed Monday is that Amit Singhal, a top Google executive who left the company in 2016, was allowed to resign after accusations that he sexually harassed a female employee were found credible and he was given an exit package worth between $35 million and $45 million. Mr Singhal would go on to work for Uber Technologies , but resigned from the ride-hailing company after Recode reported that he hadn’t told Uber about the reasons he left Google. Mr Singhal, who has denied the harassment claims, didn’t immediately respond to a request for comment. – Bloomberg